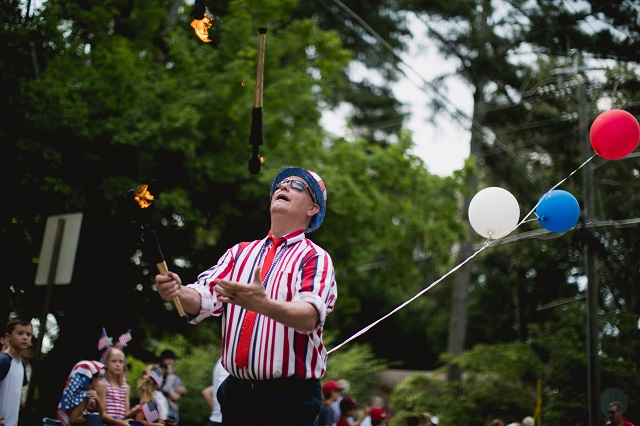 The city has decided to cancel its annual Fourth of July Parade and fireworks.

The city is reopening outdoor recreation areas to the public as cities in DeKalb are beginning to do the same. This includes Willis Park, the tennis courts, the benches at the lake and the pavilion at the clock tower and all other outdoor public space, City Manager Patrick Bryant said.

“We are in the process of producing signage for each of those locations which will encourage the public to continue following the state’s recommended social distancing guidelines,” Bryant said.

After much discussion, the city will not open the playground equipment but will open all other public outdoor spaces.

The commissioners raised concerns about opening the playground equipment and being able to keep the area sanitized.

Mayor Jonathan Elmore agreed that the playground equipment should remain closed. He said that would be a very difficult thing to control and keep clean.

“I’m ok with opening the tennis courts but the playground equipment really makes me nervous. I would prefer to not do that for at least a month,” Elmore said.

“I’m a little concerned that the opening of the playground and the tennis courts would send the message that things are getting better and we’re easing off of the concerns about the virus and I haven’t seen anything to indicate that,” he said.

Some concerns were also raised about opening up the tennis courts and being able to still social distance but Bryant said city staff feels that people can remain six feet apart while playing tennis and the city will encourage those waiting to play to not gather around the courts.

“There has been some interest from the community in reopening the tennis courts so that they can get some additional recreation opportunities and maintain the spacing that they need to go on about their day,” Bryant said.

“We just don’t see any way that we would be able to enforce social distancing measures for either the parade or the firework event so because we can’t guarantee that, we don’t feel that these events would allow for the entire community to participate,” Bryant said.

Bryant recommended waiting until June to make a decision on the Labor Day race so the city has more time to see if more information becomes available or if conditions change.

In other business, Assistant City Manager Shannon Powell gave an update about the Town Green project park design. The project includes building a park and a mix-use building along Highway 278/ North Avondale Road.

The design of the park is based on a concept designed by local architect Sheri Locke and details have been finalized after a period of public comment including a survey and two public workshops.

Powell said about 250 people participated in the survey. The takeaways from the survey include being inclusive and welcoming to all people, bringing in people year-round, maintaining the flexibility to support events and daily uses and being good stewards of economic and natural resources.

The park design is circular in nature with various open spaces for an event lawn, performance area and a play area. There will also be areas where people can sit and experience a sense of quietness and reflection, Powell said. 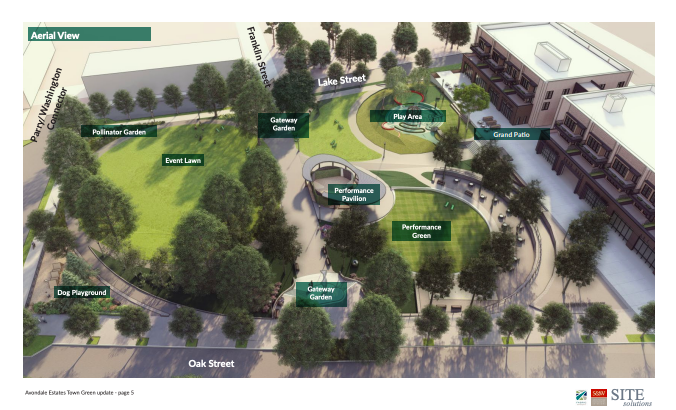 Photo of park design obtained via the city of Avondale Estates. 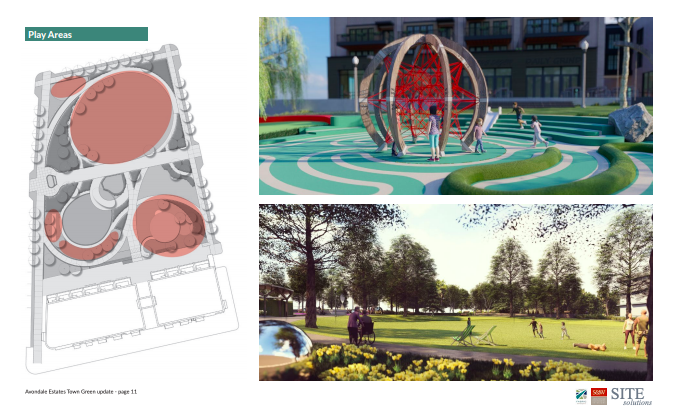 Photo of park design obtained via the city of Avondale Estates.

Some comments during the process illustrated the importance of environmental features, Powell said.

One thing that was a driving force relative to the overall park design was the ideas of garden space as an identity for the space, said Eric Bishop, an architect with Site Solutions, the design firm chosen to design the park.

“What we’ve done is we’ve created a series of smaller garden spaces around the green itself,” Bishop said.

The performance venue will be intended to allow for smaller performances and will be supported by the commercial development, Bishop said.

Powell added that one surprising response to the survey was how often people thought they would use the space. She said some people think they will use the space at least twice a week.

The park will also have an event lawn that will provide for many events as well as some open space in general, Powell said.

Another large feature of the park is the play area that will have a sculptural play structure, swings and slides.

The city and the design team also considered how parents and kids interact, providing an inclusive space for all children.

“We’ve got some tucked away spaces that allow for children who might be on the autism spectrum to be able to get away,” Bishop said. “We’re also incorporating some musical elements and other things. The idea is to provide as (many) different experiences to children of all levels but at the same time have it not look just like a playground. We want it to be part of the identity of the space and bring out some of the artistic nature and qualities that Avondale Estates exhibits.”

The commissioners expressed their excitement for the design and for the project moving forward.

“This makes me really, really happy,” Elmore said. “This makes me glad I ran for office. It took a lot of folks. We have long ways to go but this is a really awesome design. I really like Sheri’s design but I think that this is taking it to the next level.”

The City Commission will meet at 6:30 p.m. on Monday, May 18, through Zoom. Meeting details will be provided on the city’s website prior to the meeting.