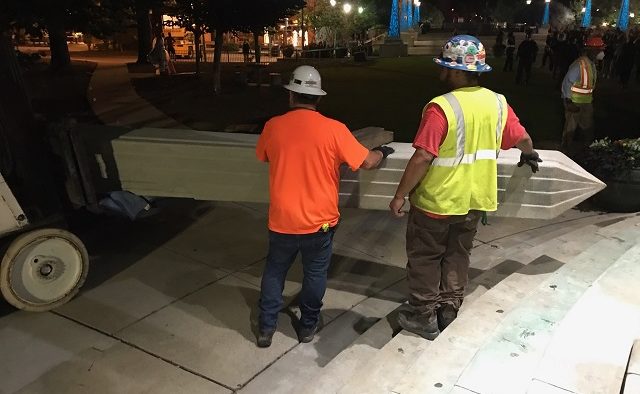 Crews removed the top portion of a Confederate monument in the square on June 18. The base will be gone by Friday morning, June 19. Photo by Dean Hesse
Share

Decatur, GA — A crowd gathered in the Decatur Square on June 18 to watch workers remove a Confederate monument.

The monument removal process was underway as of 11:06 p.m. and by midnight the workers had removed the top portion of the monument. Most of the crowd dispersed after that, and the workers remained on the scene to remove the base of the monument which was expected to take several hours.

Decaturish live-streamed the event and recorded the monument’s removal on its Twitch channel and its Instagram account.

A judge recently ordered the removal of the Confederate monument in the Square. During a protest on June 17 it was plastered with signs commemorating lives lost to white supremacy and calling for its removal. Two signs on the front of the monument read “I will be taken down by June 26th, hopefully sooner!” Superior Court Judge Clarence Seeliger ordered the monument to be removed by that date.

Seeliger’s order was in response to a complaint filed by Decatur City Attorney Bryan Downs. In his complaint, Downs said the monument has become “a flashpoint, a danger to the community, and a burden on the city of Decatur.”

Downs specifically cited repeated vandalism of the monument as a reason to expedite its removal.

“For the past three years, the monument has been a frequent target of graffiti and vandalism,” Downs’ complaint says. “The monument has been spray-painted, marked on, taped over, and, on at least one occasion, smeared with human feces. Every time such incidents of graffiti and vandalism occur, city resources are expended. This includes investigating potential criminal damage to property, coordinating clean-up efforts with the monument’s owner (DeKalb  County), and  responding to media inquiries.”

“Based on the Verified Complaint and the evidence and legal argument presented at the hearing, the Court finds that the Confederate obelisk located on real property owned by DeKalb County on the Decatur Square has become a public nuisance, as that term is defined in Title 41 of the Official Code of Georgia, and must be abated immediately,” Seeliger wrote.

The monument is located by the old DeKalb County courthouse and was constructed in 1908. It is widely seen as a symbol of the Jim Crow era south, a not-so subtle message to Black residents who would question the status quo. Activists have been calling for its removal for nearly three years.

The base of the monument, which is currently being removed, says the following:

(South Face): Erected by the men and women and children of Dekalb County, to the memory of the soldiers and sailors of the Confederacy, of whose virtues in peace and in war we are witnesses, to the end that justice may be done and that the truth perish  not.

(West Face): After forty two years another generation bears witness to the future that these men were of a covenant keeping race who held fast to the faith as it was given by the fathers of the Republic. Modest in prosperity, gentile in peace, brave in battle, and undespairing in defeat, they knew no law of life but loyalty and truth and civic faith, and to these virtues they consecrated their strength.

(North Face): These men held that the states made the union, that the Constitution is the evidence of the covenant, that the people of the State are subject to no power except as they have agreed, that free convention binds the parties to it, that there is sanctity in oaths and obligations in contracts, and in defense of these principles they mutually pledged their live, their fortunes, and their sacred honor.

(East Face) How well they kept the faith is faintly written in the records of the armies and the history of the times. We who knew them testify that as their courage was without a precedent their fortitude has been without a parallel. May their prosperity be worthy.

Earlier in the day on June 18, CEO Michael Thurmond announced a press conference for June 19 to “discuss the pending removal of the ‘Lost Cause’ Confederate Monument and the path forward for DeKalb County and the state of Georgia.”

Decaturish will provide another update about the monument’s removal on Friday, June 19. 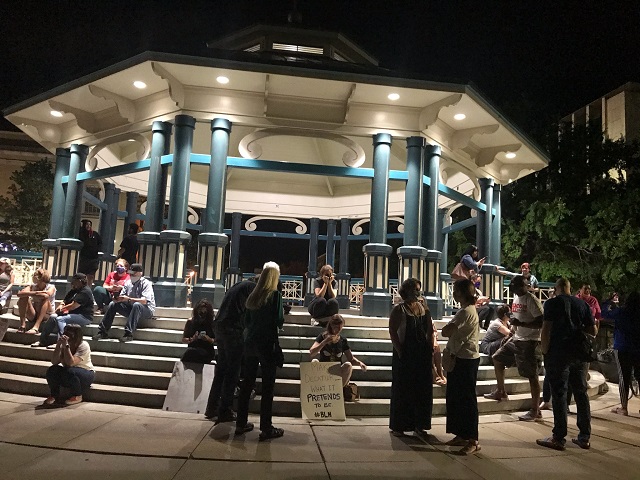 A crowd could be seen gathering in the Decatur Square on Thursday evening, June 18. Photo by Dean Hesse 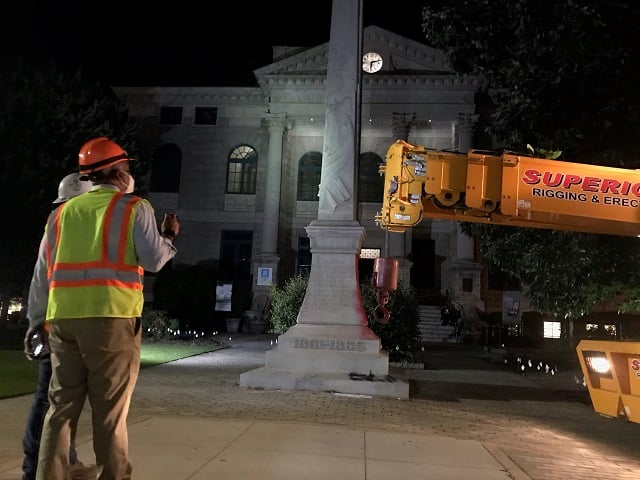 Construction equipment could be seen near the Confederate monument on the Decatur Square on the evening of June 18. Photo by Dean Hesse 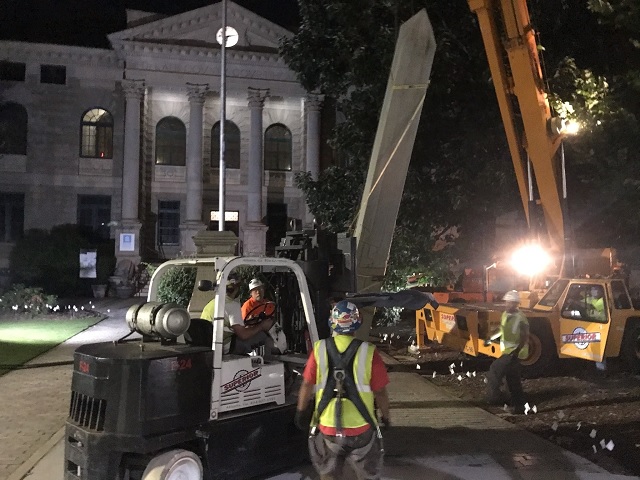 Crews removed the top portion of a Confederate monument in the square on June 18. The base will be gone by Friday morning, June 19. Photo by Dean Hesse