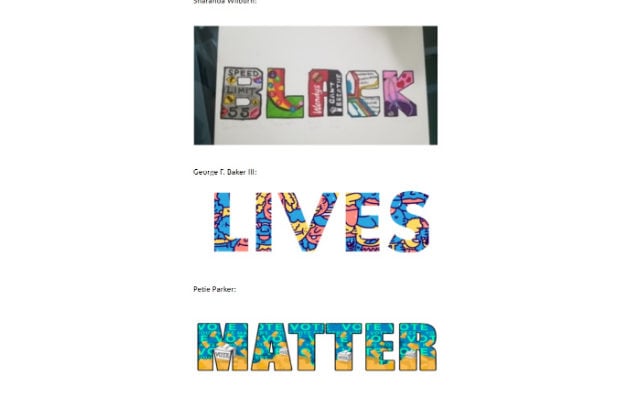 Concept drawing artwork that will be installed on North McDonough Street. Image obtained via the city of Decatur
Share

Commissioners discussed and approved the project to create a “Black Lives Matter” painting along North McDonough Street. The community art project will be created over the weekend of August 21 to 23. According to City Manager Andrea Arnold, an estimated budget of $16,000 has been allocated for the project, including artists’ fees $7,500, stencil, paint and paint supplies $5,000, PPE/sanitation supplies $1,000, and contingency, $2,500. Funding is available in the general fund budget.

Commissioner Lesa Mayer shared the artists’ initial concept designs for the painting. Three artists, Sharanda Wilburn, George F. Baker III, and Petie Parker, will work collaboratively on the painting, with each artist being responsible for one word of the painting. The artists will also guide community members in participating.

In Sharanda Wilburn’s design, each letter of the word “Black” includes a symbol alluding to a life that was lost.

Petie Parker’s design for “matter” features ballot boxes with the word “vote” repeated throughout the design. Parker said in a statement that voting was what came to mind when he thought about what currently matters.

City Manager Arnold says she is unsure how long the painting will last due to wear on the road, but hopes it will be up for six to eight months. The Commissioners discussed the possibilities of preserving the design in the form of a yard sign or something similar.

– Russ Madison, Finance Director for the City of Decatur, presented the quarterly financial report in light of the pandemic. There was a shortage of 1.4% from the originally adopted budget (not the revised budget that was approved in June). The property tax collection rate remains strong at 99.7%. Parking meter and recreation service fees have decreased. The city also saw fewer new business openings than last year.

– Mayor Pro Tem Tony Powers announced four new people to be appointed to the board of the Decatur Legacy Project: Mark Arnold, Mark Ethan, Paul Mitchell, and Brian Smith. The motion to appoint them was approved.

– The Commission is continuing their census tract challenge through August 20. Commissioners noted that citizens can update their census response if they left someone out. To fill out the 2020 census, visit http://my2020census.gov/ or call 844-330-2020.

The U.S. Census Bureau announced Monday that counting efforts would be ended a month earlier than planned, on September 30, which risks a large part of the population not being counted.

“When I think about meaningful reparations I think about equity in education, opportunities for homeownership, and I think about Black business ownership … I challenge us all to look into ways we can deepen our commitment to our community but especially our Black community in Decatur, to support those efforts,” Mayer said.

Mayor Garrett said that she and City Manager Arnold had recently met over Zoom with representatives from Beacon Hill Black Alliance for Human Rights. The organization plans to propose a collaboration with Decatur Makers for a statue of John Lewis that would be placed in the Beacon Hill community, according to Mayor Garrett. The project would utilize money from the antiracism fund, and the proposal will be delivered before the end of August.

Mayor Garrett said she has been selected as one of 27 mayors in the state of Georgia to serve on an equity and inclusion commission for the Georgia Municipal Association.