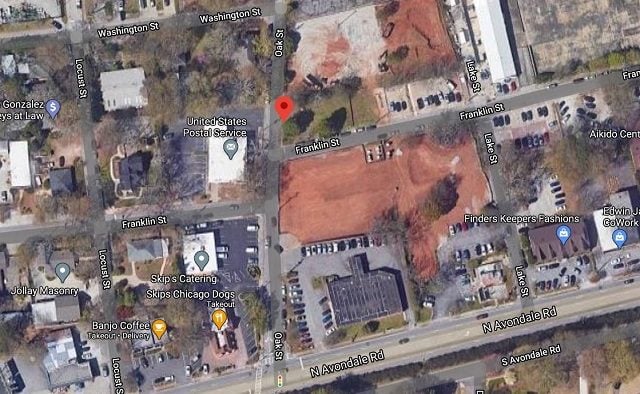 Avondale Estates, GA — The Avondale Estates City Commission on Wednesday moved forward with their intent to acquire the property at 2950 Franklin Street by eminent domain.

City Manager Patrick Bryant said during the regular meeting on Wednesday, Feb. 10,  the street grid runs through the property on Franklin Street and the city needs that right of way in order to build a new road.

The new street will run along the northern edge of the new park and the area includes the Lifeline property and property owned by Avila, Decaturish previously reported.

Lifeline Animal Adoption Center has since moved from 2950 Franklin Street and the city will move forward with obtaining that property through eminent domain. It is needed in order to connect Parry and Washington Streets downtown. That connection is the first piece of the street grid the city is tackling, Bryant said.

Eminent domain can only be used if the city is going to utilize the property for a public purpose like building a new street, Bryant said.

City staff is working to acquire the rights of way for the project so the connector can be constructed concurrently with the town green project. 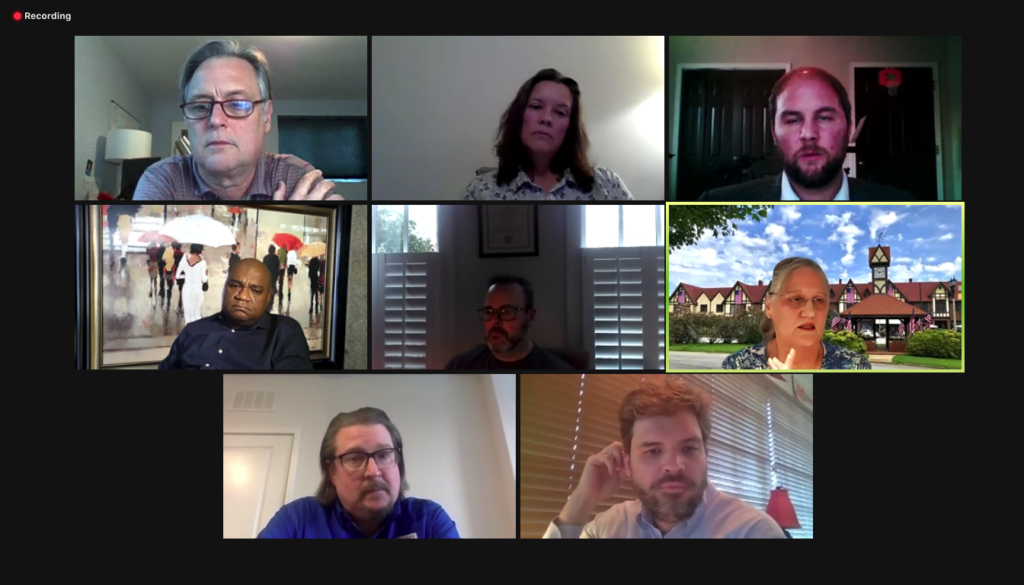 Photo caption: The Avondale Estates City Commission met on Wednesday, Feb. 10, for a regular meeting and work session to discuss the street grid project, renovations to the public works building and a change to the city’s legislative process. This photo is a screenshot of the Zoom meeting.

Embarking on this action follows plans that date back to the downtown master plan, the adoption of the street grid and other urban redevelopment plans, Commissioner Lisa Shortell said.

During the work session, which followed the regular meeting, the City Commission also discussed plans to renovate the public works building, a discussion that has been ongoing for a few years.

The consensus of the board was to renovate the existing building while continuing to look for a new location.

“Well, the short version is I would be in favor of renovating our existing building and the longer version is that we have been chasing this one for quite some time and have stumbled along the way and that’s unfortunate,” Mayor Jonathan Elmore said. “But I think that we have a good solution here.”

The city found a facility that was possibly a good fit and asked a contractor to provide the cost of renovating that building. The contractor did the same for the current facility. But the city is no longer negotiating with the property owner and it seems that option is off the table, Bryant said.

Mayor Pro Tem Brian Fisher continues to have concerns about the location of the public works building, which is located at 166 Locust Street and is near where the city will be building the new park.

The public works building has been a priority for Commissioner Lionel Laratte since he was first elected and he is not concerned about the location of the current facility.

On his walks around the city and the facility he has stopped at The Lost Druid brewery to get a sense of any impact the public works building has on the restaurant. In the times he has been there he hasn’t noticed an adverse effect.

“People come to the business. There aren’t any smells. There isn’t any noise so at this point I don’t have a problem with it being where it is. I appreciate everything that we’re about to embark upon to make things better in that location,” Laratte said.

He added that he spoke to a resident who lives near the building and she has not been bothered by it after living there for several years.

– The Urban Redevelopment Agency, which is composed of the members of the City Commission, approved an agreement with Fabric Developers to facilitate the construction of the Town Green, a park and potential event pavilion along Highway 278/North Avondale Road.

The city had to negotiate a new agreement after the scope of work for the project changed. The original concept included a park and a mixed-use, condo-retail building but the commercial development is not feasible at this time, Bryant said.

They are planning a temporary solution that will essentially be an event pavilion where the city can allow food trucks and other things to activate the park.

Since the scope of work changed the new agreement establishes Fabric as the project manager and ensures they will adhere to all relevant state bid laws for the project. It also establishes a percentage fee for Fabric which will be 5 % of the project costs for labor and materials, the agreement says.

Bryant said the current estimated cost of the interim solution is $450,000.

– The City Commission approved the amendment to the ordinance reading process. An ordinance will now have to be read twice, a decrease from the previous three readings, unless there is unanimous consent from the board to do one reading.

The change passed with a 4-1 vote. Commissioner Dee Merriam dissented, stating previous concerns about providing ample time for the board and residents to understand an ordinance and allow for public comment.

Shortell, again, reminded the board and the public that under the new structure the City Commission can defer an item as long as needed.