Decatur, GA — There is new evidence supporting allegations that City Schools of Decatur Superintendent David Dude has been frequently absent in excess of the vacation days he’s recorded in the district’s payroll system.

Dude has been responsible for documenting his own vacation since he was hired in 2015, but he input those vacation days into the district’s payroll system on Jan. 27 of this year in response to a records request from Decaturish. His contract also allows him to cash out his unused vacation days. Since 2016, Dude has cashed out $100,000 worth of unused vacation days, money he received in addition to his other salary and benefits.

But new records provided this week show that Dude was gone on days he didn’t record as vacation days, especially in the summer of 2019. CSD records show that on July 17, 2019, Dude received a $24,980 pay out for days he says he did not use.

Dude and the School Board have not responded to questions about the new evidence showing he took more time off than he recorded in the payroll system. There’s a School Board meeting tonight, March 9, that begins with a closed-door executive session at 5 p.m. to discuss legal and personnel issues.

Currently, the district is facing five federal lawsuits, including one filed by former human resources director David Adams. He claims Dude pushed him and former finance director Susan Hurst out of the district when her allegations about Dude’s taking more vacation days than his contract allows were reported to the school district’s attorney. Hurst and Adams both left the district in December 2019.

Whenever Dude is not working, he’s required to temporarily delegate someone to act as superintendent on this behalf, according to the terms of his contract. These documents, known as a Temporary Delegation of Authority, are signed by the superintendent and a notary.

The strongest piece of evidence in support of Adams’ claims is an auto-responder email from 2019. The auto-responder email sent from Dude’s email account on June 11, 2019 says Dude would return on Tuesday, July 16, 2019. But according to vacation requests he entered into the school district’s payroll system, Dude’s only vacation days in the summer of 2019 were on July 12 and July 15.

The Temporary Delegation of Authority documents for the summer of 2019 shows that Dude appointed a temporary superintendent from June 14 to July 6, 2019 and from July 7 through July 15, 2019. 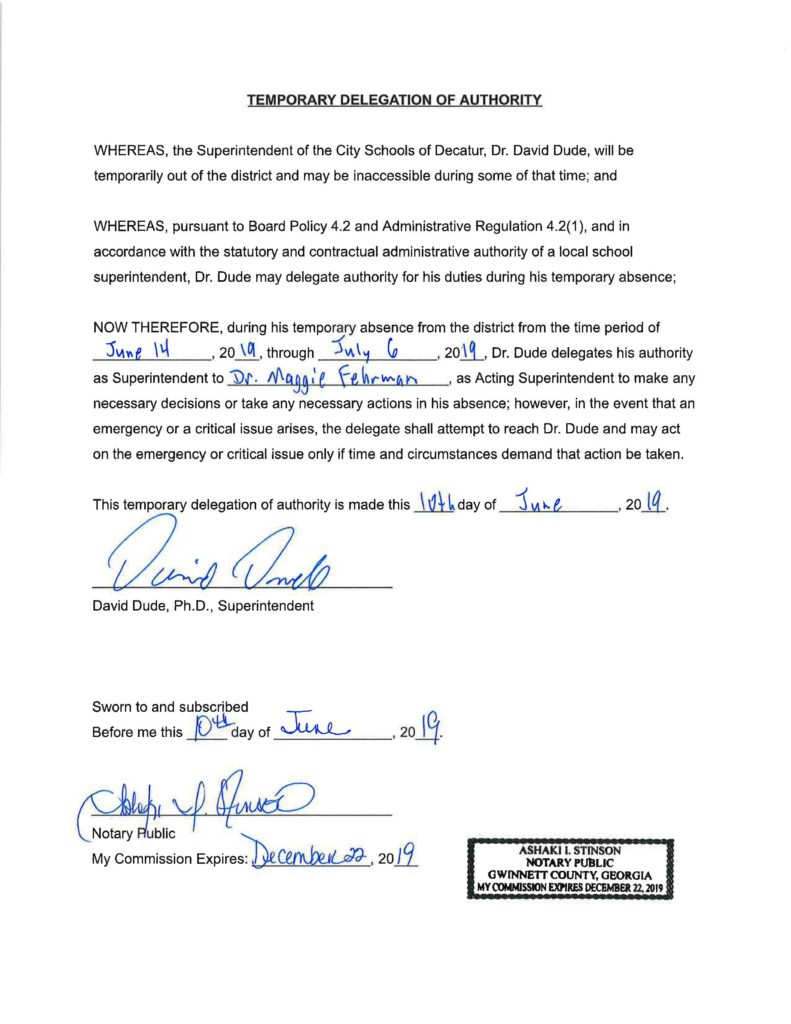 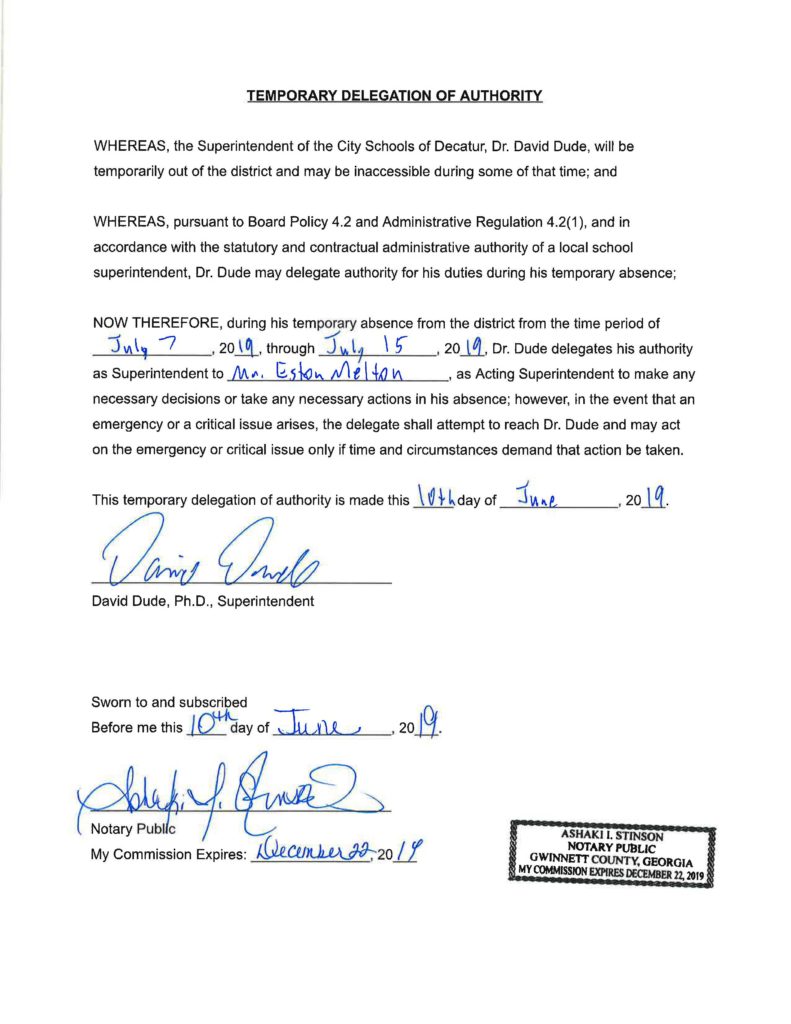 An attorney for the school district said no one is intentionally withholding documents from Decaturish.

There are other Temporary Delegation of Authority documents that do not align with the days Dude recorded in the payroll system.

*These dates include a weekend

He also signed a Temporary Delegation of Authority document for Feb. 12 through Feb. 15, 2020. He didn’t record those as vacation days either.

Decaturish has asked the school district to ensure it has provided all documents responsive to our records requests, citing the state’s Open Records Act. It’s not clear who retrieved the records provided in response to our request. If someone working for the school district intentionally violates the ORA, they could face civil penalties and the persons involved in withholding the documents could be convicted of a misdemeanor offense.

Our investigation has also uncovered that Dude’s new contract appears to make firing Dude for cause more difficult and makes it more expensive to fire him for the board’s convenience. It also revealed that the School Board in 2016 gave Dude money for a down payment on his home by allowing him to cash out his vacation days.