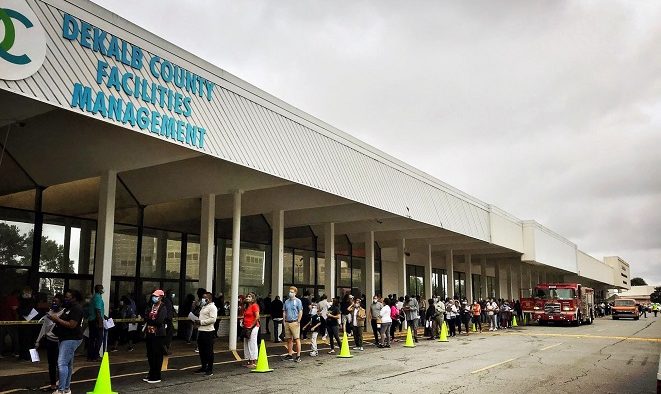 A long line of voters gathered outside the Voter Registration and Elections Office on Oct. 12, the first day of early voting in the Nov. 3 elections. Photo by Dean Hesse
Share

DeKalb County, GA — Five percent of registered voters in DeKalb County have no form of identification required to vote under the new voter law SB202, said the county’s elections department in a meeting on Aug. 12. Absentee ballots can be requested starting Aug. 16 for county-wide municipal elections on Nov. 2.

SB202 was signed by Governor Brian Kemp in March. Under the new law, when requesting and returning an absentee ballot, voters must prove their ID with a driver’s license number, state ID number or other acceptable voter ID. At the polls, a voter’s identity will be verified by name, date of birth and address.

The new law made changes to absentee voting, early voting and vote counting.

Hamilton said DeKalb County Elections is planning to launch a “big media blitz” for voter IDs through social media and at Marta stations. Residents can also obtain a free IDs at the Elections office on Memorial Drive. Additional outreach materials will be distributed to registered voters, said Hamilton.

“SB202 changed how we can pick advanced voting locations. They have to be county government-owned buildings or an election day polling place,” said Hamilton.

In DeKalb County, cities must pay to hold early voting for municipal elections. Schools are not an option for three weeks of early voting because students are in the building.

“So you asked them all, ‘Do you want early voting for your city?’ and only Brookhaven and Atlanta said yes,” Jester said. “As soon as this meeting ends, I’m going to be calling those people and asking them why they did not take you up on having advanced voting locations…”

“We need to be thoughtful about our voters, and whether or not we’re giving them an opportunity to exercise their right to vote,” said Susan Motter, who utilizes early voting in Tucker.

Tucker, Clarkston, Stone Mountain, Decatur and Avondale Estates will all conduct municipal elections for mayor and city council seats. In DeKalb County, an Educational Special Purpose Local Option Sales Tax (E-SPLOST) question is on the ballot. Decaturishvotes.com will cover all elections online and in the e-edition on Oct. 1.

DeKalb County Elections Board meets again on Aug. 18 for a special called meeting to review charges brought by J. Max Davis, former Brookhaven mayor, in December 2020. Davis questioned the legitimacy of voters in DeKalb County during the November 2020 election.