Decatur, GA — Throughout the school year, City Schools of Decatur will be evaluating the district’s foreign language program and focusing on collecting data on the K-12 world language program, Assistant Superintendent of Teaching and Learning Kristy Beam said at the Sept. 28 School Board meeting.

During her presentation, the board looked at the Spanish program and baseline data from the Standards-based Measurement of Proficiency (STAMP) scale and the International Baccalaureate program.

The primary goal for the foreign languages program is to provide students with the functional knowledge and language skills that will help them understand and connect with cultures and communities, according to the agenda packet.

Students are tested in second, fourth, seventh and 10th grades. 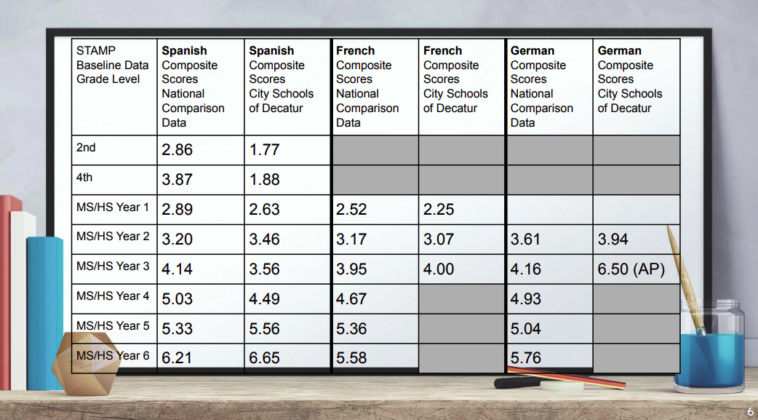 This table represents City Schools of Decatur’s STAMP scores, which are on a scale of one through nine. The district also had a couple of AP scores from students who self-selected to take the AP exam. The district does not offer AP world languages. Photo is from the CSD website.

Beam noted there are some questions about the data which will be examined throughout the program evaluation. For example, CSD does not offer advance placement courses for the world languages, but the data reflects a couple AP scores. Beam said two students self-selected to take the AP German exam.

Beam explained that part of the difference may be that most other elementary schools are probably offering an immersion program where CSD is not. City Schools of Decatur offers three days of language instruction a week for a total of 90 minutes a week at the elementary schools.

“I think it is important, and you’ll see it also in our IB course, the exposure that they’re getting in the early grades, while it’s not comparing favorably with immersion programs, it is giving them the benefit in the outcome, the long run,” Beam said.

In the IB program, high school students in the Spanish program had a pass rate of 92% and the world average was 91% in 2020. The mean score for Decatur High School was 4.75 compared to the world average of 5.12 last year.

The Spanish review team will engage in a comprehensive evaluation to develop a coherent program overview, look at program attributes, analyze the best and current practices, look at the curriculum and how the instruction is delivered, what professional learning is needed, and then will make recommendations to the School Board in the spring.

— In other business, the School Board discussed its legislative priorities with the district’s lobbyist Don Bolia of Peachtree Government Relations. The board set their initial priorities as building relationships with legislators, advocating for more early learning funding, evaluating the senior tax exemption, supporting equity work within school districts and retaining the ability to charge tuition if the district chose to do so.

The city of Decatur doesn’t have one legislator who represents the city, so Bolia recommended that the School Board work on building relationships with the legislators who represent the area, such as Sen. Elena Parent.

He added that legislative redistricting is happening this year and is something the district should pay attention to.

“I think that it’ll be interesting to see how they draw the DeKalb legislative delegations. That will be done in November,” Bolia said. “Right now, you really don’t have a Decatur centric legislator. You don’t have someone whose kind of really looking at the interests of Decatur. So the hope is that they would draw a district that would maybe put someone as a Decatur centric legislator.”

The district’s senior homestead tax exemption will be on the ballot on Nov. 2. Earlier this year, Gov. Brian Kemp signed a bill that would give tax cuts to seniors living in Decatur that would apply to City Schools of Decatur taxes. SB 292 replaces an earlier and more expensive version of the tax cuts.

The legislation provides tax relief for seniors by giving an exemption on $200,000 of assessed home value, or $400,000 of appraised value, for seniors aged 65-69, if their combined household income doesn’t exceed $53,000. Seniors 70 and older will receive the same exemption on the same assessed home value, but without an income cap, according to a press release from CSD.

The bill has a two-year sunset. If approved, the exemptions will go into effect on Jan. 1, 2022 and remain in effect through 2023.

School Board member Heather Tell said the board needs to stay on top of the issue, as CSD will have to reintroduce the discussion to the legislature in 2023.

Superintendent Maggie Fehrman added that the board should prioritize funding for early learning, particularly to make sure that every student at the Decatur Housing Authority has access to free early learning.

“I think that to me would be a huge payback and support for our children,” Fehrman said.

Some members of the board also wondered about the resolution the Georgia Board of Education passed in June that banned teaching students about racism. The state board wants to encourage schools to teach the facts and also make sure that, down the road, nothing that is divisive in nature becomes part of the education system’s standards.

The resolution seemed to be targeting “critical race theory” and it was in response to a letter sent by Gov. Brian Kemp, Decaturish previously reported.

“I absolutely expect to see something like that. I would be shocked if someone didn’t introduce it,” Bolia said.

Bolia recommended having topics, like critical race theory, under agenda items for larger groups like the Georgia School Board Association because sometimes it’s better to have a unified front on issues that impact many school systems.

School Board member Jana Johnson-Davis wondered if leaving the issue to the GSBA would be enough.

Fehrman said the district can put a declarative statement in the resolution on where CSD stands regarding critical race theory and equity work.