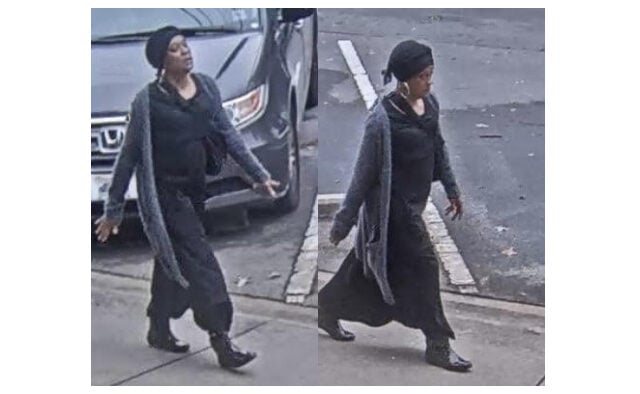 Decatur Police are asking for the public's help identifying a woman in connection with two assaults that occurred in Oakhurst on Wednesday, Oct. 6.
Share

Decatur, GA — Decatur Police are asking for the public’s help identifying a woman in connection with two assaults that occurred in Oakhurst on Wednesday, Oct. 6.

Police on Oct. 11 released photos of the person they’re looking for.

“We are attempting to identify the person pictured below regarding two assaults that occurred on Wednesday, October 6, 2021 in the Oakhurst neighborhood,” Sgt. John Bender said. “If you have any information that could help in identifying this person or assist with the case, please contact Inv. Edwards at 678-553-6621 or [email protected] You may also contact Crime Stoppers Greater Atlanta at 404-577-8477 and remain anonymous.”

Police say that on Oct. 6 a woman assaulted two girls by forcefully hugging them and kissing them on the mouth.

“Three juvenile females were walking in the 1000 block of Oakview road when they were approached by an unknown adult female,” Sgt. Bender said. “The adult female engaged the juveniles in conversation about the upcoming Halloween holiday. At the conclusion of the conversation, the adult female hugged two of the juveniles and then kissed them both on the mouth. The juveniles then left the area and proceeded to Oakhurst Elementary school to inform an adult.”

Parents of the children have said the “conversation” police described was an obscene rant and said the incident terrified their children.

Police also believe the same woman also slapped another woman and called out to a group of girls in the same neighborhood about an hour later. The incident occurred on the Fifth Avenue Upper Elementary campus during the Girls on the Run program being held at the school.

Sgt. Bender said, “On Wednesday, October 6, 2021 at approximately 4:24 p.m., A Decatur officer was flagged down within the 100 block of Fifth Avenue in reference to an assault. An adult female approached a staff member from behind while she was outside of Fifth Avenue Upper Elementary school and hugged her. The suspect then began to call out to a group of children outside of the school. The staff member stood between the suspect and the group of children and was slapped by the suspect before the suspect walked away from the area.

“The suspect was described as a Black female, 40-50 years of age, 5’5” tall, wearing a black sweater, black skirt, black head scarf and rainbow colored rain boots. Investigators are currently looking at the similarities in this case and the assault of two juvenile females within the 1000 block of Oakview Road on the same day.”