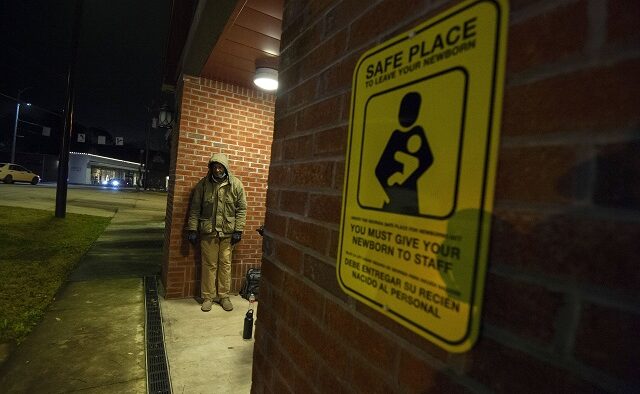 Barry Martin waits outside for the warming center at DeKalb County Fire Station 3 in Avondale Estates to open on Thursday, Jan. 6, 2022. Photo by Dean Hesse.
Share

These letters are in response to a recent column by George Chidi about the county’s warming centers. To read that column, click here.

Mr. George Chidi: As far as I am concerned, anyone who boasts they “helped close” an underfunded, beleaguered shelter that assisted many unhoused people is not one whose voice should be heeded too closely. Your ideas should be fiercely countered, instead.

No one cares about your “utilitarian philosophy.” This is not about you. This is about unsheltered people and their human and civil rights. According to your callous ideals, it’s okay if a few unhoused people die here and there – it’s just collateral damage, after all.

Are you aware that every year, the National Coalition for the Homeless holds memorials in many cities for those people who died while being unsheltered due to hypothermia and other preventable causes? One death due to hypothermia is too many, but you seem to think that, say, “six,” is okay. You also seem to think that “cold injury” is okay to endure. It’s very easy to say these things when you’re sitting in a toasty home while it’s 28 degrees outside, pontificating about your “utilitarian” values.

And anyway, according to my source, linked below, 19 homeless people died from hypothermia in a two-year period (2017-2019). You’ll note that it says, “Eighteen of those deaths happened after Peachtree-Pine closed its doors.” So while you brag about helping to close a shelter that kept people protected from the elements, these newly-unsheltered people were dying in the DOUBLE digits due to the very preventable medical emergency known as hypothermia.

Which brings me to the next point: Where are your sources, exactly, for the number you cite of those who have died due to hypothermia while being unsheltered in those years you cite? Where are your sources for anything you state, including the “thousands of dollars a day” you allege it takes to keep a warming shelter open?

Can you A) please cite your sources for these items and B) at least pretend to care about those with dementia and chronic alcohol and drug abuse disorder who you claim are the true sufferers of hypothermia? (Besides, who’s to say they were not homeless at the time – I can only speculate because, again, your sources are lacking.)

You said, and I quote:

“It is not an act of moral monstrosity to prioritize permanent housing over short-term comfort.”

The word “comfort” used in this context has curious connotations. You seem to think a warming shelter is some sort of privilege.

DeKalb County (and City of Atlanta) can afford to provide warming shelters and prioritize permanent housing. It is actually a “moral monstrosity” to not do either, and county and city leaders do not deserve any “grace” for not doing what they were, in fact, elected to do: uphold every citizen’s human right to protection from the elements, which includes temporary as well as permanent shelter.

Where is the line to cross before one offers solutions to prevent human suffering or loss of life of the unhoused in DeKalb County? George Chidi’s “Dekalb’s winter of discontent about warming centers” misses that line altogether.

For the working group of neighbors in the city of Decatur and surrounding area, who meet weekly since November, that line was crossed with the first cold snap. It’s what we see and do not see that prompts action.  We see  individuals and families in inclement weather at bus shelters and sleeping in parking lots. We volunteer to take them, some in wheelchairs, to a warming center, and donate food and clothing.  We do not see enough wraparound services and shelter offered by DeKalb County.  There are over 300 on the waitlist for shelter.

So, we meet with county officials, offer solutions like a minimum of 48 hour notice when warming centers open.  And question why are individuals left to fend for themselves at 8:00 a.m. when the warming center closes in near freezing temperatures?

We do not look for a stable number of hyperthermia deaths that allow us to sleep at night. One death is too many. Untold suffering from people living outside without enough to eat is why we refuse to accept business as usual.  According to Mr. Chidi, it is remarkable that Dekalb County does not have a 24 hour emergency shelter, and the area counties’ delivery of services amount to offering a bus ticket to Atlanta.  Another term comes to mind: unacceptable.

Dekalb County needs to do better.  This is not a zero-sum game.  We need effective warming centers and long-term solutions for affordable housing. Now is not soon enough.