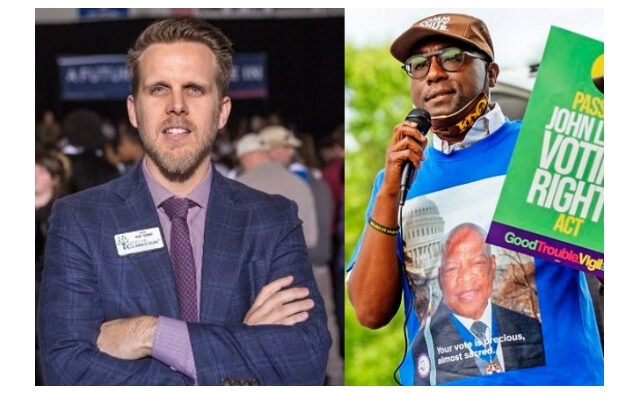 And Terry, who had been all but called a racist by Johnson, laughed and agreed he felt like Johnson’s little brother, at times.

The discussion at the Feb. 8 county commission meeting was ostensibly about Terry’s proposal to establish an ad hoc affordable housing committee. But the subtext was Terry’s overall critique of the county commission’s committee system, how it tends to devote precious little time to important topics. The subtext was also Terry’s recent clashes with Black commissioners who lead other committees.

Terry is asking for the county commission to prioritize affordable housing in DeKalb. He pointed to a 2018 report on housing affordability that recommended the county CEO hire a “chief housing officer” and the creation of a “housing committee,” neither of which has happened.

His resolution, presented as a walk-on agenda item at the Feb. 8 meeting, proposed the creation of such a committee, at least as a starting point for a discussion about housing affordability in DeKalb County.

But his proposal quickly became mired in the process of running county commission meetings and the technicalities of what a committee is.

Commissioner Larry Johnson, for example, chairs the Planning, Economic Development, and Community Services Committee. Issues related to housing affordability fall under his committee’s purview, he said. And he was none too happy that Terry didn’t run his proposal through his committee and instead tried to walk on the item during the meeting.

Commissioner Larry Johnson lamented that this snub occurred during Black History Month, and he recounted his own experiences with subtle displays of racism. He recalled getting his master’s degree in Colorado. He was the only African American in the program at the time. He recalled recommending incorporating African culture into an evening class about management theory. Someone at the university later advised him, “You’re going to have to adopt the dominant cultural way of thinking and talking, if you want to make it in America.”

“I’ve dealt with these Proud Boy bullying tactics for years,” Commissioner Larry Johnson said, making a reference to the Proud Boys hate group, of which Terry is not a member. “Today it has to stop.”

He suggested Terry focus on creating affordable housing in the northern part of DeKalb County.

After Commissioner Larry Johnson finished speaking, Terry struck a collegial tone. He did not respond to Johnson’s “Proud Boy” remark.

“I did want to acknowledge and offer my respect to my colleague, Commissioner Johnson and his many years of experience,” Terry said. “My intention, is never to try to undercut or usurp or sort of try to embarrass any of my colleagues, and so that was not my intent.”

And yet, this is not Terry’s first run-in with a Black colleague who chairs a committee. Commissioner Mereda Davis-Johnson, who previously chaired the Employee Relations & Public Safety Committee, got into a public argument with Terry about his proposal to suspend drug testing for marijuana for some county job applicants.

Commissioner Mereda Davis-Johnson was against the policy change. Following the meeting, Terry accused his fellow commissioners of being misinformed and said, “Some of our commissioners say things that aren’t based in reality.”

During the Feb. 8 meeting, Commissioner Lorraine Cochran-Johnson appealed to Larry Johnson and Terry to work out their differences.

“I believe it’s important that there’s decorum, courtesy and conversation,” she said.

Commissioner Jeff Rader said he would vote to approve adding Terry’s item to the agenda, saying the commission never had any objection to walking on other items. His announcement followed grumbling from Commissioner Steve Bradshaw that the walk-ons were not appropriate for the Feb. 8 meeting.

“I can’t justify treating this any differently than the hundreds of items I have voted to add to the agenda,” Rader said.

In the end, Terry could not get a second to add his item to the agenda. But Commissioner Larry Johnson and Terry exchanged some conciliatory remarks before moving on with the meeting.

“I respect Commissioner Terry wholeheartedly,” Commissioner Larry Johnson said. “He’s almost like a little brother to me, but I just think we need to find a way to deal with this.”

Terry agreed with that analogy.

“I do feel like a little brother sometimes,” he said, noting he often leans on the experience of his colleagues.

Following the meeting, in a message posted on his Facebook page, Terry promised he wasn’t done pursuing the affordable housing committee idea.

“I’m starting the debate, we’re going to have this continue to be discussed at the board of commissioners, but for today we’ve introduced this resolution,” Terry said. “And I’m looking forward to hopefully getting more support from my colleagues.”