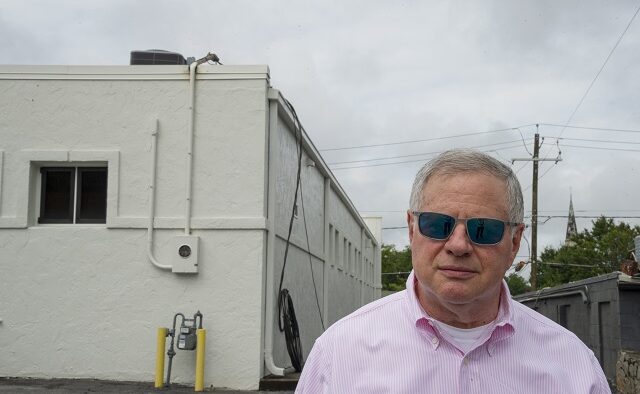 Jeff Gladstein stands in front of the damage done to the electric service entrance at the rear of his 613 Church Street property in Decatur. Photo by Dean Hesse.
Share

That’s because of the damage caused by a city of Decatur sanitation truck. The truck caused a power outage in downtown Decatur on Aug. 4 which prompted an evacuation of the DeKalb County courthouse. The truck’s front, hydraulic-lift arms were still raised while the truck was moving. It struck several sets of power lines, causing them to fall into the road.

Gladstein, a real estate developer, says the city won’t cover all the damage caused by the sanitation truck. The city says it has done everything it can to make it right.

Gladstein said the crash damaged his building’s electrical wiring, which will cost more than $20,000 to fix. Initially, the city’s insurer offered him $6,000, Gladstein said. But the city says the insurer actually cut him a check for $21,081.77. Gladstein said he hasn’t received the check and that’s not enough to cover the cost. He said he’s gotten two estimates for the work: one for $26,500 and one for $29,000 for the electrical work. “It’s not enough, and they know that.”

“Georgia Power will not reconnect power to the building until we replace most of the wiring,” Gladstein said. 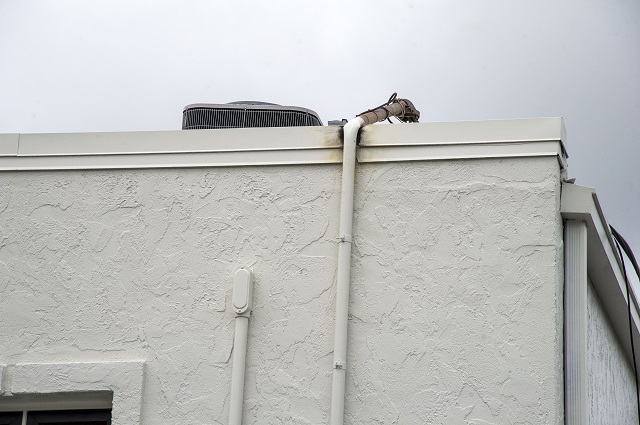 The damaged electric service mast at the rear of Jeff Gladstein’s 613 Church Street property in Decatur. Photo by Dean Hesse.

He also said city officials didn’t notify him of what happened and that his building could’ve been further damaged as a result. He discovered what happened on his own.

“We just wrote a check last week for forty grand for property taxes, and what are we getting in return? Negative service,” Gladstein said.

“It is my understanding that the insurance company issued a check to Mr. Gladstein on Aug. 22nd for the damages, and Mr. Gladstein is aware of that,” Arnold said. “City staff are not involved in determining claims settlement amounts.”

Arnold said the city’s insurance adjuster tried to reach Gladstein, but his voice mail was full. She said it was determined that the buildings were not in immediate danger.

“Police and Fire responded to the accident site and ensured people and property were safe,” Arnold said. “After the accident, Georgia Power was notified immediately and was on the scene quickly. Georgia Power shut off power to make the scene safe for their crews to assess the scene and make repairs safely. Normally, property owners would be notified onsite, but 609 and 613 Church Street are unoccupied.  There was no imminent fire or safety risk identified for the property. I also understand that the insurance adjuster had difficulty reaching Mr. Gladstein because his voicemail was full.”

She said city staff and the police chief met with Gladstein after the incident happened.

“The city regrets that this accident occurred, and we are sorry for any inconvenience that was caused to surrounding businesses and property owners,” Arnold said. “I believe the city, Georgia Power, the insurance company and all parties involved were responsive to impacted property owners and business owners.”