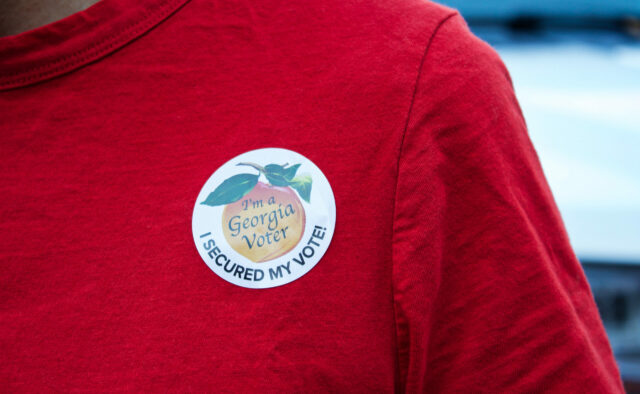 A voter sports a Georgia voter sticker after casting a ballot in Avondale Estates on Nov. 8, 2022. Photo by Zoe Seiler.
Share

UPDATE: The county has officially announced its plans for advanced voting in the Dec. 6 runoff election. To view those announcements, click here.

DeKalb County, GA — The DeKalb Elections Board, at its Nov. 15 meeting, navigated a shortened runoff window, conflicting interpretations of state law, and a pending lawsuit to devise a plan for early voting in the Dec. 6 runoff election.

The state holiday after Thanksgiving used to honor Robert E. Lee’s Birthday before the state removed the Confederate general’s name and changed it to simply a “state holiday,” according to the Atlanta Journal-Constitution.

Warnock is in a runoff against challenger Herschel Walker after neither reached the required threshold on Nov. 8.

Before recent changes in state law, counties had nine weeks to prepare for a runoff election. Now they have four, according to the AJC. But an even older law from 2016 prohibits Saturday voting if there is a holiday two days beforehand. Warnock’s lawsuit contends that law only applies to scheduled elections, not runoffs, the AJC reported.

— To allow Sunday voting on Nov. 27, from 7 a.m. to 7 p.m. or for as long as DeKalb Voter Registration and Elections can staff that early voting day.