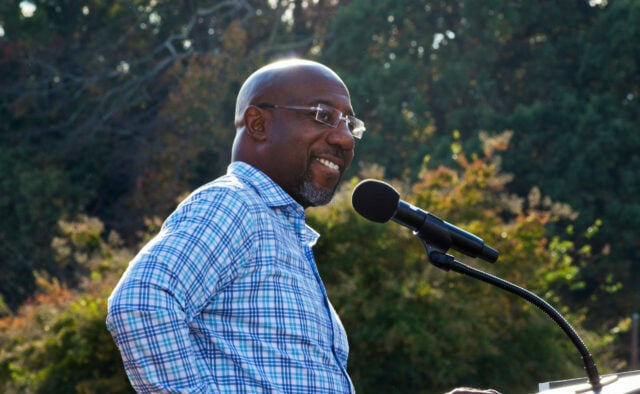 Sen. Raphael Warnock encourages voters to head to the polls during a campaign rally on Nov. 3, 2022 in Clarkston. Photo by Zoe Seiler.
Share

According to the Georgia Secretary of State, Warnock held a 35,677 vote lead, with 93.7% of the votes counted. Warnock’s lead is expected to widen as more votes are counted, putting the race out of reach for Walker.

Walker has conceded, according to the Atlanta Journal-Constitution.

Thank you, Georgia. We did it again. pic.twitter.com/jikuO5Kt8S

Both Loeffler and Walker’s political fortunes were tied to Trump’s favor.

Warnock’s victory is due in no small part to a massive get out the vote effort spearheaded by local Democrats. Voters’ cell phones buzzed with reminders about early voting, volunteers rang doorbells, and email inboxes were jammed full of messages from the Warnock campaign.

The get out the vote message worked, resulting in record-breaking early voting turnout.

Analysts following the results noted that Walker preformed slightly worse than he did in the November midterm elections in counties he had won, a sign that pointed to a Warnock win.

Democrats now hold a 51-49 Senate majority, but Republicans hold a 221 to 213 majority in the House. While Republicans gained nine seats, their showing this year was not the “red wave” many pundits and conventional wisdom had predicted due to high inflation and historical trends.