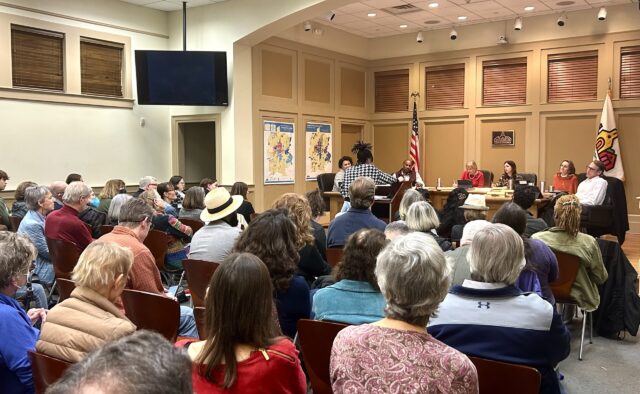 About 100 residents attended the Decatur City Commission meeting on Jan. 17 at City Hall. Many voiced their support and opposition to a recommendation to reallow duplexes, triplexes and quadplexes in the single-family residential zoning areas. Photo by Zoe Seiler.
Share

The commission will also consider the amendments to the unified development ordinance on Feb. 6.

– To allow construction of and conversion to duplexes (2-units) and walk up flats (3-4 units) in R-50, R-60, R-85, and RS-17 zoning districts by limited use, and to comply with same size and setback requirements of detached homes.

– To require parking compliance of 1 space per dwelling unit – as is currently required for detached homes – and to allow up to 50% of parking to for duplexes (2-units) and walk up flats (3-4 units) to be on-street parking, so long as frontage space meets requirements, and on-street parking is allowed.

“Missing middle housing is defined as housing types between a single-family home and a large apartment building: duplex, triplex, quadplex, and small apartment buildings,” City Planner Kristin Allin said. “Missing middle is also defined as housing targeted to middle income residents who may not want or be able to afford a single-family home but who desire to live within the city’s neighborhoods.”

Decatur is experiencing super gentrification based on the influx of a high level of wealthy residents and a loss of racial diversity.

“Recommendations to counter gentrification at this stage include adding more inclusive housing types at workforce and affordable levels to bring people in and to increase efforts to protect existing legacy residents,” Allin said.

The Atlanta Regional Commission also recommends that the city increase its housing supply by reducing development barriers, including barriers to missing middle housing, she added.

After a five-hour-long meeting, the planning commission voted in October to recommend denial of the city’s application due to deficiencies the commission members saw in the current proposal.

The city commission’s vote on Jan. 18 around 1 a.m. followed hours of public comment during the Jan. 17 meeting.

Since October, a few changes to the proposal were made. According to a memo from City Planner Kristin Allin, here are the changes:

– A four unit walk-up flat may also have one accessory dwelling unit, and will be subject to the mandatory inclusionary housing ordinance.

– For every 20 feet of street frontage of lot width, one qualifying on-street space may be counted towards off-street parking requirements; previously proposed at 15 feet.

– For a period of eighteen (18) months from June 30, 2023 to December 31, 2024, there will be in place a building permit limitation in place in which duplex and walk up flat permits will be limited to three (3) per each City of Decatur lower elementary school district, to provide sufficient time for the city to effectively implement the zoning changes in a manner that best serves the community and minimizes any adverse impacts on City residents.

“We heard a lot of feedback from the community around the possible impact on school enrollment. Therefore, city staff sought to link the areas to the school districts,” Allin told Decaturish. “Also, the school district boundaries are clear and encompass each neighborhood, so to help ‘spread out’ any initial permits evenly in the neighborhoods.”

During the public hearing, residents raised concerns about affordability, density, parking, traffic, absentee ownership and unintended consequences. Another concern raised was that new duplexes, triplexes and quadplexes would not fit in with the character of a single-family residential area. Others added that there would be more pressure put on the city’s infrastructure.

About 886 people have signed a petition opposing the amendments.

Alan Clark, the creator of the petition, said he supports the planning commission’s recommendation to deny the city’s application.

“The petition’s name is simple,” he said. “It is to ask the people of Decatur if we as a population should support the planning commission’s recommendation from October 2022 to deny this proposal and let you, our city commissioners, know that this initiative is not in line with what we think is best for the city of Decatur.”

He added that the city commission is taking on an honorable task, but didn’t think the proposal was the right answer.

“From a reduction of the width of on-street parking spaces, to added congestion, demands on city services, and the rupture of our school system for loads of new kids, this seemed like a purely academic answer to a perceived problem,” Clark said.

The concerns stated in the petition are:

– The stated goal of increasing “affordable housing” for the “missing middle” will not be met by this rezoning action.

– This rezoning action will result in excess density, more traffic, an increase in the number of children in our already congested schools and added pressure on infrastructure.

– The city has acted quickly to implement this rezoning action and has not fully contemplated its impact, including the unintended consequences.

– Applications for duplex, triplex and quadplex housing in single-family residential districts are currently considered on an individual basis and the process provides for appropriate controls and redress.

Currently, new duplexes, triplexes and quadplexes cannot be built in the city or converted in single-family zoning districts.

Those in favor of the proposal said that allowing these missing middle housing types would increase diversity in the city and would allow teachers, city employees, young professionals, firefighters, and police officers to be able to live in the city they serve.

Residents who spoke in favor also noted the proposal gives the city a chance to decide what kind of community it wants to be going forward.

The Coalition for a Diverse Decatur and DeKalb also presented the city commission a letter supporting the proposal with about 150 signatures. Several members of the coalition also spoke during public comment.

The letter, in part, states that reinstating duplexes, triplexes and quadplexes into the city’s code is reasonable, these housing types don’t lower property values, the city hasn’t seen significant impacts from investor home purchases, school enrollment is declining, and the policy won’t bring about rapid change.

Resident Wendy Cromwell said she and her husband moved to Decatur for its schools and diversity.

“Decatur is losing its diversity that’s integral to its identity, one of the reasons why we moved here,” Cromwell said. “We have a low inventory of duplexes, triplexes and quads and other missing middle housing options for our teachers, firefighters, baristas, retirees, police officers, and other public servants. They simply cannot afford to live in the city where they work.”

She added that the proposal isn’t perfect, but it’s a good starting point.

“We need to make it easier for homeowners and developers to bring these types of housing options to our city without conditional use requirements for those who simply cannot afford a single family home within our city limits,” Cromwell said.

To watch the full meeting and public comments, click here.