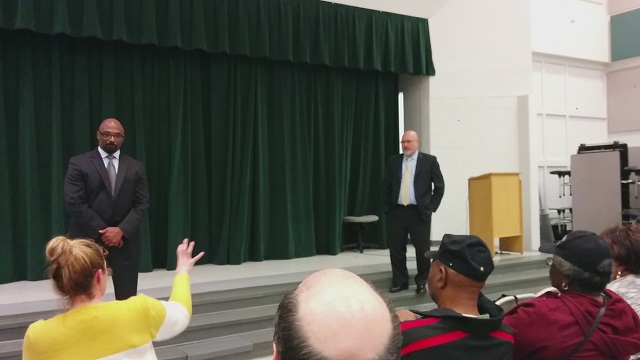 East Lake parents hoping for more input into a lease being negotiated between City Schools of Decatur and Atlanta Public Schools walked away empty handed from a meeting about the proposal.

An official with CSD and APS attended the Nov. 9 East Lake Neighbors Community Association meeting to discuss CSD’s offer to lease the former East Lake Elementary School from APS. The Atlanta School Board could consider the agreement at its December meeting. The length of the lease is unknown, but both sides stressed it would be a short-term arrangement.

Parents in East Lake were hoping to leverage the lease as an opportunity to have a larger discussion about APS’ plans for education in the area. That discussion may happen, but the community will not have the power to hold up the lease to make it happen, according to Larry Hoskins, Deputy Superintendent of Operations for APS.

“The community will not be at the table during negotiations with Decatur City Schools,” he said.

Hoskins said that APS is willing to consider earmarking the money generated form the lease for schools in the east Atlanta area. The money would otherwise go into the general fund.

The Decatur school system is in the midst of an enrollment boom and needs a location to house students while building new schools.

“Over at the city of Decatur our student population has not slowed down,” CSD Chief Operating Officer Noel Maloof said. “… We’re looking for something as a temporary option.”

While Decatur has struggled with increasing enrollment, schools in east Atlanta have had the opposite problem.

Education in eastern Atlanta has undergone a many changes over the last few years. After East Lake closed in 2012, it merged with Toomer. Competition from Drew Charter prompted parents at Toomer to pursue a K-8 model there, an idea that was ultimately nixed by former Atlanta Public Schools Superintendent Erroll Davis, who instead decided to merge Coan and King Middle. There’ve been suggestions of turning the East Lake site into an early childhood learning school, like the one in Decatur, or even selling it. But the building remains empty and APS is still considering where it fits into the big picture.

The concept of the lease of East Lake Elementary being a short-term arrangement came up frequently during the meeting.

“We’re here tonight to officially notice the community that we are engaged, Atlanta Public Schools, in a conversation with Decatur City Schools about a temporary lease, and I do stress the word temporary, of the East Lake building,” Hoskins said.

How long is temporary? There wasn’t a clear answer, though Maloof suggested a general timeline of three to five years. He said any lease would revert back to APS if it needed the space.

One parent asked if there was a possibility that East Lake residents could send their kids to the reopened elementary school. Maloof didn’t totally close the door on the idea. He said if that becomes a possibility, it would work like CSD’s student tuition program, which the school system suspended due to the enrollment boom.

“I don’t believe at this time there’s any discussions about allowing students that live outside of the district to go there,” Maloof said.