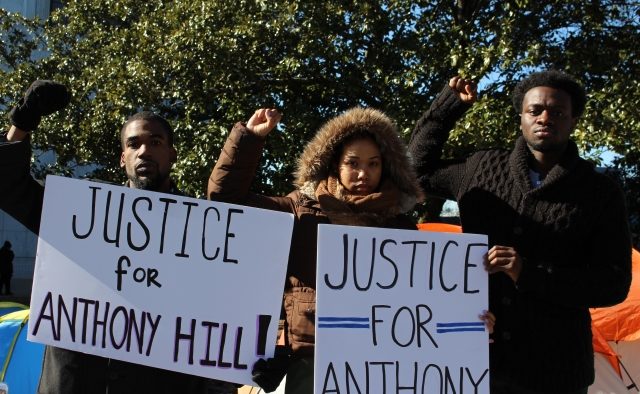 Rise Up Atlanta's Darrick Lindsey, Bridget Anderson, and activist Prohaize with Justice Trail stand in front of the Rise Up Atlanta camp in Decatur. Photo by Dena Mellick.
Share

A DeKalb County Grand Jury has indicted a DeKalb County Police officer on six counts related to the shooting of an unarmed man last year.

According to multiple media outlets, including WSB-TV and 11 Alive, the Grand Jury has indicted Officer Robert Olsen on charges related to the shooting of Anthony Hill, 27, who was naked and unarmed when he was shot and killed by Olsen outside of his Chamblee apartment complex in March. Protesters filled the streets of downtown Decatur days later. The District Attorney’s office presented the case to a grand jury for a civil review in October. The grand jury recommended further investigation in the case.

The organization Rise Up Georgia had camped outside the DeKalb County courthouse this week in the cold and the rain awaiting the Grand Jury’s decision.

The group posted this video of the reaction to the Grand Jury’s decision:

All 6 counts. It’s been 6 years since an officer was indicted in GA. #AnthonyHill#MentalIllnessIsNotACrimepic.twitter.com/u0EN8H3Uto

DeKalb County District Attorney Robert James announced today that Robert Olsen will be the first law enforcement officer in Georgia in at least five years to be prosecuted for fatally shooting a civilian while on duty.

Today, prosecutors presented evidence to the grand jury showing that Olsen shot Hill, 27, during a confrontation in Chamblee on March 9, 2015.

The felony murder charges stem from two separate felonies committed by Olsen – aggravated assault and violating his oath as a certified Georgia peace officer. Specifically, Olsen is charged with violating his oath to “observe all the rules, orders and regulations” of the police department, including the agency’s Use of Force policy. The indictment charges Olsen with falsely telling a fellow officer that the victim physically assaulted him prior to the shooting.

“My job is to uphold the laws of Georgia and prosecute anyone who violates them. This case is no exception,” James said. “The facts and circumstances surrounding the shooting death of Anthony Hill warranted felony murder charges.”

In October 2015, the District Attorney’s Office presented the shooting case before a grand jury for civil review. During that presentment, the grand jury recommended “further investigation be conducted to aid in the decision to pursue this case.”