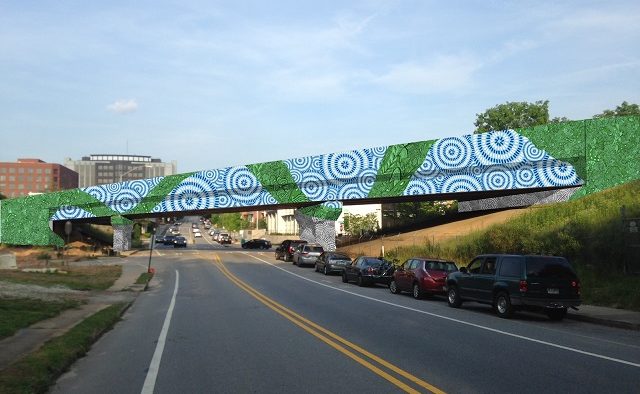 The artists behind a mural being painted on the MARTA overpass have decided to stop their work until April, the city of Decatur says.

According to an announcement from the city, “The artists worked for a month through the middle of December and one side of the mural is just about finished along with the pilings under the Overpass. The other side has been pressure washed and primed and is ready for the detail work.”

Two artists are in a residency program at the Massachusetts Museum of Contemporary Art from the end of December through January, the city says.

“They will return to finish the mural the first week of April when the weather is warmer so the paint will adhere better,” the city says. “In addition to finishing the mural, they will be working with Decatur Active Living and the community at the Decatur Housing Authority to enhance the area under the bridge.”

That area will be a playground paid for by a KaBoom! Play Everywhere grant.

“The space will be an extension of the mural and have features such as hopscotch, four-square, an artist-created bench and more,” the city says. “The space is also used as a bus stop by the adjacent community and once the mural is complete and the space is activated, it will be brighter, more welcoming, and add an element of fun to the area.”

The Decatur Arts Alliance selected the MILAGROS Collective, from Miami and New Orleans, to head up the mural project. Design concepts were unveiled Aug. 31. The mural will cost $30,000, and will be partially funded with a $15,000 grant.

This isn’t the first delay for the mural project. The discovery of lead paint and the subsequent abatement held the project up for several weeks. Work began in the middle of November.