The Decatur Police Department has released new details about a June 20 shooting that fatally wounded a teenage girl and sent another passenger to the hospital with life threatening injuries.

Police said Janae Owens, 17, died as a result of her injuries. Police are not revealing where Owens lived, but said she wasn’t a resident of Decatur. The car she was riding in, a red Nissan, had a Louisiana license plate.

Police said at this time they don’t know what the motive for the shooting was.

“On Wednesday, June 20, 2018, at approximately 5:48 p.m., Decatur Police responded to a person shot report at the intersection of South Candler Street and Midway Road,” the Police Department said. “Upon arrival, officers located two victims who had sustained gunshot wounds while inside a vehicle. Both victims were transported to an area hospital. One victim was pronounced deceased and the other victim was treated for non-life threatening injuries. The deceased victim has been identified as 17 -year-old Janae Owens. The second victim is an adult female who is not being identified at this time. There was a third individual in the vehicle who did not sustain any injuries.”

Police are hoping to name a suspect on Thursday afternoon, June 21.

“The Decatur Police Criminal Investigations Division and the Georgia Bureau of Investigation are investigating the incident. The incident is being investigated as a homicide,” the Police Department said. “If you have any information about this incident, please contact the Decatur Police Department at 404/373-6551 or Crime Stoppers Greater Atlanta at 404 577-Tips (8477) and remain anonymous.”

Police provided this photo of the suspect’s vehicle:

Whether the suspect knew any of the victims or the shooting was a case of road rage is still unknown, Sgt. John Bender from the Decatur Police Department said at a press conference on Thursday.

At the press conference, Sgt. Bender specified that the victims were not city residents but said all three people riding in the Nissan were related.

Both vehicles were traveling southbound, and the shooting occurred at a traffic light where the victim was turning left. 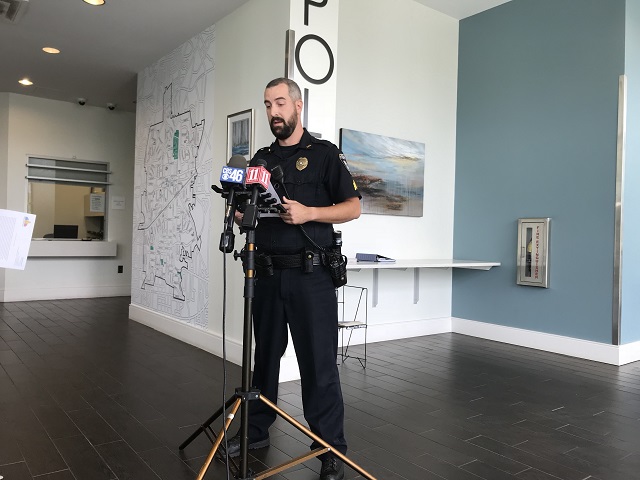 The incident is being investigated as a homicide. The Georgia Bureau of Investigation is assisting with the police department’s investigation of the case.

“We will find [the suspect] eventually, and right now, our thoughts are with the victim,” Bender said.

While murder in Decatur is a rare occurrence, this year has seen more murders than any in recent memory.

In March, a Renfroe Middle School student and her mother’s boyfriend were stabbed to death by the girl’s uncle inside Trinity Walk apartments.

A suspect, Royce Stewart, was arrested in that case.

Prior to that incident, there hadn’t been a murder in Decatur since 2016. A police spokesperson said the last double homicide in Decatur occurred in 2007 and was a “domestic related incident.”