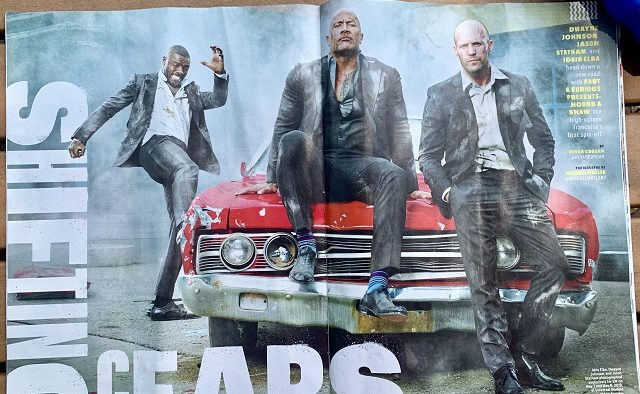 We need big movies during the summer because summer is a happy time. It’s the best time to put the world in peril. June is a good month for alien invasions. July is right for superheroes flying through the sky. August is time for international espionage and bioterrorism. Who needs the beach?

“Hobbs & Shaw” was my last hope for a fun movie this summer. “John Wick 3” and “Spider-Man: Far From Home” weren’t great. While I’ve loved independent films like “The Last Black Man in San Francisco,” “Booksmart,” and “The Farewell,” not all great movies are fun. I was depending on the latest entry from the “Fast & Furious” series to make me happy. And I watched the previous eight movies to prep.

As with any buddy cop movie, you need opposites. Dwayne Johnson (Luke Hobbs) is the rough American and Jason Statham (Deckard Shaw) is the smooth Brit. They hate each other for unknown reasons and spend the entire moving roasting each other. You don’t even have time to say, “Oh, snap!” before the other guy makes you say, “Oh, snap!” again. Eventually, they get to punching and fighting.

The bad guy is thinly-drawn Brixton (Idris Elba) who says he’s Black Superman, but he’s really Black Thanos. His goal is to wipe out the weak people from the population via his biogenocide capsules. Hattie Shaw (Vanessa Kirby) injects herself to save the world.

Luke, Deck, and Hattie fly from L.A. to London to the Ukraine to Samoa. Saving the Earth means some car chase scenes in London, but not enough to make it feel like Dominic Toretto is behind the wheel. In fact, we don’t even hear mention of Dom or Letty or Tej, and that made me sad. They didn’t even put a little fast or furious in this movie.

Eventually, the fate of the human race is Hobbs and Shaw against Brixton. I forgot to mention that Brixton is either a cyborg or bionic, which means he gets almost no funny lines in a movie that was 75 percent humor.

“Fast & Furious” has a habit of turning bad guys good. Think about it. Dom, Letty, Vince, Owen, Deckard, Hobbs, Gisele, and Elena were all the “bad guys” at some point in the series. So fingers crossed for “Fast & Furious Presents: Brixton Redeemed.” I will buy all the tickets for that.

I like men. I like Idris, Jason, and Dwayne. I like them a lot. But at some point, it was too much. It wasn’t toxic-masculinity, but nauseous-masculinity. We came up for air with the few scenes that had women. Kirby plays Hattie who doesn’t mind a fight, while freakishly keeping her fake eyelashes and eyeliner on point for the entire movie. Maybe it’s Maybelline? Her cat eyes were not smudged once in two hours. We also get two great mothers. Hobbs has Sefina (Lori Pelenise Tuisano) and Shaw has Queenie (Helen Mirren). Totally worth the price of admission to see these two women handle business.

There are new characters. Kevin Hart actually made me laugh. Ryan Reynolds is the worst. He is the same character in every single movie. I wasn’t sure if he was reading the script from “Deadpool” or “The Proposal.” Ryan, you’re never going to win an Oscar if you keep channeling your character from “Two Guys, a Girl, and a Pizza Place.”

We get a glimpse of Luke’s brothers including Mateo (played by Roman Reigns). He played football at Georgia Tech in his pre-World Wrestling Entertainment days so we have to love him. He is pretty. I want to smell what he’s cooking.

Then it’s over. The movie strangely ends in an anticlimactic way.

I’m still mad at “Tokyo Drift” for being a bad movie, screwing with the Fast & Furious timeline, and killing off a certain character (#JusticeForHan). I’m concerned that “Hobbs & Shaw” might be screwing with the timeline again. If you blink, you will miss the fact that the timeline is a little bit further in the future then we are initially led to believe. This only matters if you want to make sense of all the movies. Otherwise be content with the action scenes.

In the end, the movie was a lot of fun. Stupid fun. We get the good guys who win, the bad who doesn’t get justice because we need a sequel, and the hint of a badder villain behind a mysterious voice. I laughed at the jokes. I laughed at the utter ridiculousness of the action sequences. I laughed when Hobbs thought he was Captain America in “Civil War” and tried to pull down a helicopter. I fell in deep and true love with Jason Statham, but just until I can get Vin Diesel back for “Fast & Furious 9.” Not that I’m counting the days.

It’s the most fun you can have watching a summer movie. It was so dumb. It was so much fun. It’s like “Lethal Weapon” meets “Moana” meets “The Six Million Dollar Man.” Grade C.