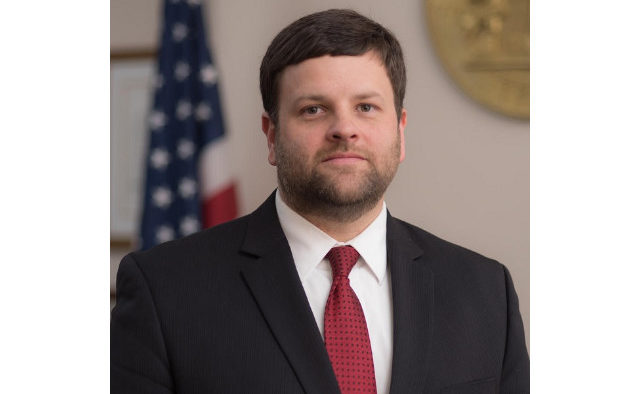 Fleming’s comments come as the state has declined to issue a statewide stay-at-home order, letting cities decide for themselves how to react to the pandemic.

“The media and some in the medical profession are peddling these doomsday models and projections,” Fleming wrote on Facebook. “This has, in turn, resulted in people panicking and local governments across our state overreacting.” 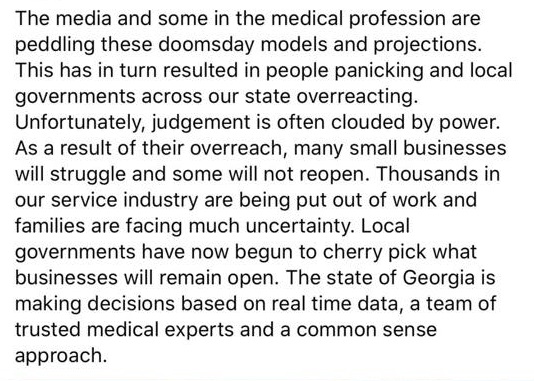 Locally, Atlanta, Avondale Estates and Decatur have implemented some version of a stay at home order. So has DeKalb County. Fleming’s statement says local governments have begun to “cherry pick” what business stay open and what businesses must close. But without a statewide shelter in place order specifying what is an essential business, those decisions inevitably fall to the cities.

The Atlanta Journal Constitution reached out to Kemp’s office. A spokesperson said local officials have contacted Fleming to voice concerns that the different local orders are “confusing.” The spokesperson told the AJC there were “some problems” with advice that Emory University epidemiologist Carlos del Rio gave to city leaders before many of them issued stay-at-home orders.

The spokesperson then cited an article in the conservative publication The Federalist, which says data cited by del Rio included information from COVID Act Now, “an organization that describes itself as “a team of data scientists, engineers, and designers in partnership with epidemiologists, public health officials, and political leaders to help understand how the COVID-19 pandemic will affect their region.”

The article is titled, “Inaccurate Virus Models Are Panicking Officials Into Ill-Advised Lockdowns.”

In Georgia, COVID Act Now predicted 688 hospitalizations by March 23. By that date, they had around 800 confirmed cases in the whole state, and fewer than 300 hospitalized.

In a press briefing on Monday, del Rio said estimates can vary depending on the models being used.

“Modeling is just a tool that allows us to make decisions not totally in the blind,” he said. “Models are not perfect. Each model has its difficulties. Models respond to the input you put in, but models are better than no models when you’re trying to predict what’s going to happen.”

During his briefing, he pointed reporters to the Institute for Health Metrics and Evaluation. That model predicts Georgia will hit its peak resource use by April 22 and that Georgia will have a bed shortage of 755 ICU beds. That model also predicts 2,777 COVID-19 deaths in Georgia through August 4.

Models can vary depending on how much social distancing is assumed.

“The models differ in what the inputs are,” del Rio said. “You have to rely on the best available inputs. Unfortunately, some of the inputs might not be readily available. You have to guesstimate.”

“Again, models are changing all the time as more accurate data is coming,” del Rio said. “You keep on changing the models. That’s a reality of modeling … as you get information, new data and new inputs come in.”

He noted that the Institute for Health Metrics and Evaluation predicted 82,000 deaths in the United States, which the president rounded up to 100,000 deaths.

“Modeling is not a perfect science,” del Rio said. “Rather than saying the model is not good, we need to see what are the limitations and more importantly how do we make decisions.”

He applauded President Trump for extending social distancing through the end of April instead of trying to reopen the country by Easter.

“Let’s erase April from our calendars,” del Rio said. “If we’re able to hunker down in April and increase testing significantly, really increase testing, continue clinical trials, I think by early May we will be fine, but we have to do those things.”

While Gov. Kemp has declined to order a shelter-in-place, he’s told vulnerable people to stay inside and banned all gatherings of 10 or more people. He’s also closed public schools.

So what’s his view of Georgia’s response?

That said, if Atlanta orders residents to shelter-in-place and other cities do not, that limits the order’s effectiveness.

“I think the state government is doing the right thing,” del Rio said. “I wish it had been done earlier, that doesn’t mean it’s not going to be effective.”