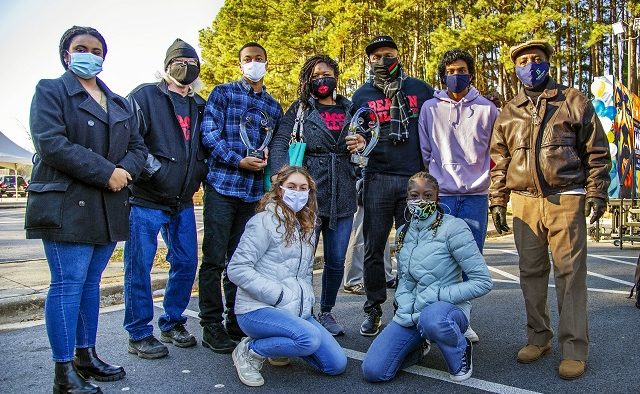 Members of Beacon Hill Black Alliance for Human Rights Youth/Student Committee and the Decatur High School Black Student Union pose with CEO Michael Thurmond after he presented them with the Nathaniel Mosby Humanitarian Award for their successful efforts in the removal of the confederate monument in the Decatur Square in June of 2020. Photo by Dean Hesse.
Share

Decatur, GA — The Decatur High Black Student Union was featured in a segment on Good Morning America this week for their efforts to remove a Confederate monument from the Square and to place a marker noting the arrest and sentencing of Martin Luther King Jr. during the Civil Rights era.

The proposed marker near Decatur City Hall would educate residents and visitors about a little-known piece of Civil Rights history: when Dr. King was illegally sentenced to “public works,” otherwise known as a chain gang or hard labor, in a misdemeanor traffic case. According to the students’ research, Dr. King’s arrest, and the court’s malfeasant sentence and incarceration of Dr. King, had a significant impact on the Civil Rights movement and the political direction of the country when then-candidate John F. Kennedy and Robert F. Kennedy intervened to free Dr. King from jail. This act led Black voters in the South to shift parties and elect John F. Kennedy over incumbent Vice President Nixon.

The Confederate monument in the Decatur Square came down in June. The monument was located by the old DeKalb County courthouse and was constructed in 1908. It is widely seen as a symbol of the Jim Crow era south, a not-so subtle message to Black residents who would question the status quo. Activists had been calling for its removal for nearly three years.

Superior Court Judge Clarence Seeliger ordered the removal of the Confederate monument in the Square by June 26, declaring it a public nuisance after years of the monument being defaced by protesters. The Decatur community plans to erect a memorial to late Congressman John Lewis in the space where the monument once stood.