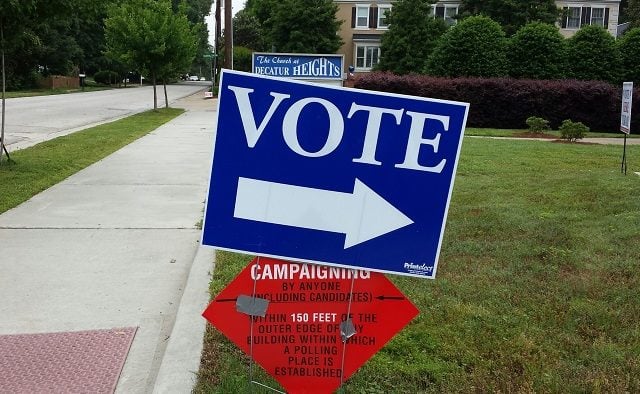 DeKalb County, GA — The polls are open for voters deciding who to send to the Gold Dome in the special election for House District 90 between former county commissioner Stan Watson and public relations specialist Angela Moore.

Early voting started Feb. 24 and runs 8 a.m. to 4:30 p.m. through March 5 at the DeKalb Voter Registration & Elections Office on Memorial Drive and the Wesley Chapel-William C. Brown Library on Wesley Chapel Road. But voters won’t be able to use absentee ballot drop boxes in the run-up to Election Day on March 9.

The election is to fill the seat of former state Rep. Pam Stephenson, whose daughter used a power of attorney to announce her mother’s resignation in September due to Stephenson’s personal health issues. HD 90 includes parts of DeKalb, Henry and Rockdale Counties.

Watson beat Moore by 11 points in the Feb. 9 election, but neither cleared the 50 percent threshold to win the race outright. Four other candidates took part in that election.

Moore made her case for why voters should send her to the Gold Dome in an interview with Decaturish. Watson did not respond to our requests for an interview.

Moore vowed to be an inclusive state representative to her constituents if elected.

“We haven’t had that and I feel like that’s what we really need,” she said. “People don’t even know who their representative is. I want to be engaged with the community.”

Moore’s top priority would be education.

She also wants to persuade the state and the Biden administration to increase access to healthcare and housing.

“We’re getting ready to go into a housing crisis that’s going to be awful,” Moore said. “DeKalb found out what kind of crisis we’re really in when they put out that rental help.”

Moore opposed the cityhood of Stonecrest and said its charter needs to be amended.

“The Mall at Stonecrest is on life support and the city is buying up the property and they’re going to pass that tax burden onto the citizens, and I’m one of them,” she said. “When the county is trying to help people with their rent, we’ve gone up 30 percent on homeowners’ taxes during the pandemic.”

Moore thinks voters should be able to decide on creating the new city of Greenhaven.

“But from the consensus I understand they do not [want it],” she said. “And it would be a huge burden on the county if they became a city.”

Moore believes MARTA heavy rail service should be extended to South DeKalb and into Rockdale.

“A lot of people would support it and there’s a lot of people that come that way,” she said. “We do have the buses at the mall, but coming to South DeKalb we don’t.”

But, she added, “We’ve got to save our businesses before we can move in that route. There’s going to be so many evictions coming up soon and so many businesses have died.”

Watson served for 10 years in the Legislature, and is a former head of the Legislative Black Caucus and the DeKalb delegation. He previously served as a DeKalb County Commissioner and was implicated in federal corruption investigations. After resigning from office, Watson pleaded guilty to a charge of theft by conversion for stealing $3,000 meant to cover the cost of government trips.

Moore in 2015 was disqualified from running State Senate District 43 office because she didn’t live in the district, according to The Rockdale Citizen.