Decatur’s planters will soon be history; here’s what the future looks like without them

Decatur’s planters will soon be history; here’s what the future looks like without them 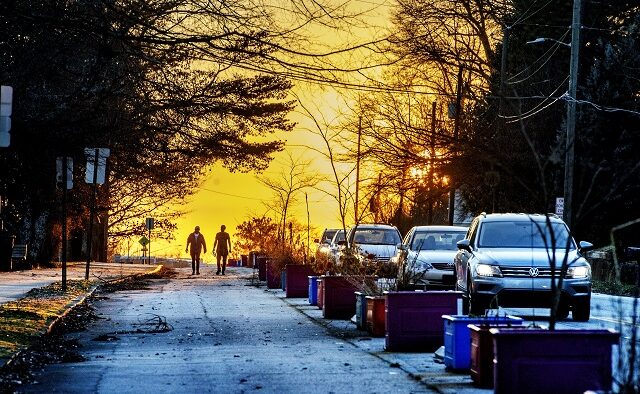 Editor’s note: This story originally appeared in the March 1 Decaturish.com e-edition. The e-edition is delivered exclusively to our paying supporters. To become a supporter of Decaturish, visit supportmylocalnews.com

Decatur, GA — The planters along West Howard Avenue have a long run as a traffic-calming solution and as a source of complaints and jokes. The 197 multicolored planters were always meant to reduce the lanes temporarily from four to two on the street but have lasted longer than expected.

They will soon be replaced with a permanent solution.

Several years ago, the city worked with the neighborhood on a solution for slowing down the traffic on West Howard, as the wide road presented an opportunity for speeding, Decatur Mayor Patti Garrett said. Children use that route to walk to school and it’s popular with pedestrians and cyclists.

City staff researched other ways to slow down the traffic knowing the planters would be a temporary solution.

“[The recommendations for permanent solutions are] a little later than we anticipated, and I think all of us would say that the planters did their job in terms of narrowing the street,” Garrett said. “I think we were hoping to get a more permanent solution in a little sooner, but certainly COVID has impacted our ability to get some of the projects restarted.”

The city began working on the “Reimagine West Howard” project in July 2018 to improve safety, access and comfort for pedestrians, bicyclists and motorists traveling along West Howard Avenue. The modifications extended from the city limits near Paden Circle to Commerce Drive.

“Howard Avenue has always been our radar just in terms of speed enforcement. Being four lanes, it connects to Atlanta [Avenue], it’s a volume of motor vehicle service for transportation,” Junger told Decaturish.

– On-street parking near Atlanta Avenue and the Friends Meeting house

In recent years, City Schools of Decatur changed its attendance zones and students living north of Howard Avenue went to Oakhurst Elementary School on Mead Road, as well as the middle and high schools, which serve the whole city.

Junger said that early in the process he met with a mother and son to discuss the road. The son talked about his experience walking to Oakhurst Elementary and how scary it was to cross four lanes of traffic. They asked the city to make some changes.

“The concept of road dieting was not foreign to us. We decided to make it a project to study West Howard Avenue. We worked with a consultant. That was Alta Planning and Design,” Junger said. “We decided to have a community engagement process where we [went] and met with the community, listened to the concerns, provided a variety of feedback mechanisms.”

Vehicle speeds and a lack of pedestrian crossings were major concerns, but everything was up for consideration when the city was figuring out what changes to make.

“We put boards out along the path for community input where people could see what we were talking about. There were conversations about how to create a more inviting and engaging space along Howard Avenue, traffic-calming measures, pedestrian improvements,” Junger said.

The boards were placed by the East Lake MARTA station, at Atlanta Avenue and near Decatur High School. Options included adding on-street parking, reducing the lanes, adding a bicycle path and using planters for traffic-calming.

“Ultimately, the one that had a majority of support was what you see out there today,” Junger said.

Reducing the lanes on West Howard Avenue came after the city reduced the lanes on Church Street, giving the staff a chance to test the concept before installing the planters.

“We had a plan to put a permanent road diet on to Church Street, reducing it to two lanes, and we took the opportunity to test that with reducing it to two lanes on what we considered a temporary basis, but go ahead and do it inexpensively and provide alternate parking while Glenlake [Park] was under construction,” Deputy City Manager Hugh Saxon said.

“The traffic counts, we thought, would be well served by just two lanes,” Junger said. “It didn’t need four lanes for the volume of traffic that we measured. We gave Alta the guidance that we wanted a lower cost, non-permanent type of solution. That was a parameter given to them upfront. We also wanted to do this in a timely manner.”

There was discussion on what to do with the extra space between the planters and the PATH Stone Mountain trail and if the city needed more bike lanes or space out there.

“Ultimately, we decided that we didn’t,” Junger said. “The space is there. If somebody wants to use, they’re welcome to use it, but we didn’t really program the area between the planters and the multiuse trail.”

Finding a permanent replacement for the planters was tied to the Atlanta Avenue railroad crossing improvements, as both projects have similar goals and focus on bicycle and pedestrian safety.

Overhauling the Atlanta Avenue intersection was the last to task to complete on the city’s 2007 transportation plan, because it’s the most challenging and costly project, Garrett said.

“We knew at some point in time we were going to redo the entire intersection and that we at that time would put in some permanent infrastructure,” Mayor Garrett said.

Saxon added that the city is looking for ways to provide a safer railroad crossing for pedestrians, bicyclists and motorists.

“Those are similar goals to the Reimagine Howard Avenue process. We believe we have enough money in our budget, which is one of the things we didn’t have five years ago,” Saxon said. “We’ve already got a bicycle and pedestrian focus for the crossing.”

He added there’s an opportunity to make the permanent changes to West Howard Avenue that would replace the temporary planters with a permanent structure that would still reduce the lanes and make a new narrower, safer street.

“[For] the most popular option the layout would be similar, but there would be planted, landscaped islands instead of planters [and the] same basic roadway widths,” Saxon said.

The Punchline of Jokes

While the planters may have served their purpose, they also became the punchline of many jokes from residents. Resident Huckleberry Starnes started making stickers, signs and other merchandise poking fun at the planters. One design he started with was redesigning the city logo to feature three planters instead of the building.

“I really love Decatur as a city,” Starnes said. “My response on the logo was basically pointing out the hypocrisy of people who claim to have so much pride in the city, but are also so quick to tear it down when not really adding anything.”

During the pandemic, he also made a sign warning residents to wear their masks or they’d get more planters. The business has been successful, judging by the bumper stickers on numerous cars in the city, and Starnes has become known as the “planter guy,” he said.

“I get to hear everyone’s unsolicited feelings on the planters,” Starnes said.

Starnes added that it will be interesting to see what happens after the planters are removed and whether people will be nostalgic for them.

When the planters were initially installed, those passing by them had a lot to say about the colors of the planters.

Junger said the city has always taken a creative approach to doing things and wanted to create an engaged, lively space using color.

“Decatur has always been a very artsy, eclectic community. We believe in use of color as a general rule. You walk through our city buildings, and you’ll see that they’re not the normal institutional feeling. We embrace art,” Junger said. “We’ve learned through this. I think if we were to implement something maybe a little more edgy, now we know, let’s talk about that upfront. We didn’t get that detailed in the community meetings.”

“I never really imagined that, that was going to be a sticking point like it became,” he added. “That surprised me, honestly. Not what I would have expected.”