Commissioner Scott Drake will not run for reelection

Commissioner Scott Drake will not run for reelection 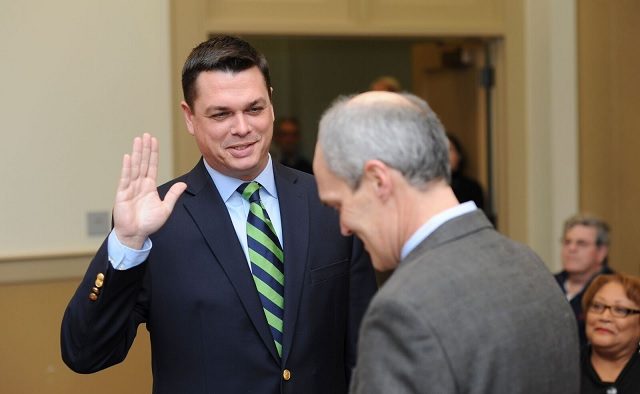 Drake, who has young children, said he found it increasingly difficult to balance his time as a father, a business owner and a public servant.

“It gets harder as they get older,” Drake said.

City elections will be held Nov. 5 and there are three seats on the City Commission ballot.

Commissioner Drake has deep roots in Decatur. Drake is the son of former Decatur Mayor Walt Drake. He’s also a business owner with financial interests in the Decatur Pure Station and the Universal Joint restaurant.

Drake joined the Decatur City Commission in 2013, winning special election to fill a vacancy created by the resignation of Decatur Mayor Bill Floyd. When he ran for his first full term, he drew two challengers and narrowly beat Eric Tumperi. Incumbents tend to be unopposed in Decatur elections.

As a commissioner, he was there for important moments in recent city history like the purchase of the United Methodist Children’s Home property, since renamed Legacy Park. He also wasn’t afraid to ask questions or vote in opposition to his colleagues when he felt it necessary. Last year he was one of only two “no” votes on an annexation that would bring 300 apartments into the city.

Commissioner Brian Smith was the other no vote. Smith disputed a report in the Atlanta Journal Constitution saying he was undecided about running again. Smith said he definitely is running. Mayor Pro Tem Tony Powers will also run for reelection.

“There’s some unfinished business,” Powers previously told Decaturish. “There are some things we need to do.”

The 2019 elections are shaping up to be an interesting one. School Board member Annie Caiola recently announced she would resign in August, opening up a third seat on the School Board.

Her at-large School Board seat will appear on the Nov. 5 ballot along with the seats held by Garrett Goebel and Tasha White. Goebel isn’t running. White is.

Here are the rules for anyone who wants to seek a seat on the City Commission or School Board this year.

One City Commissioner from Election District at Large

One Decatur Board of Education member from Election District 1, Post B

One Decatur Board of Education member from Election District 2, Post B

One Decatur Board of Education member, At-Large (Editor’s note: The election for this seat will be to finish Annie Caiola’s term. The winner of this election will have to run for another four-year term after serving a short two-year term.)