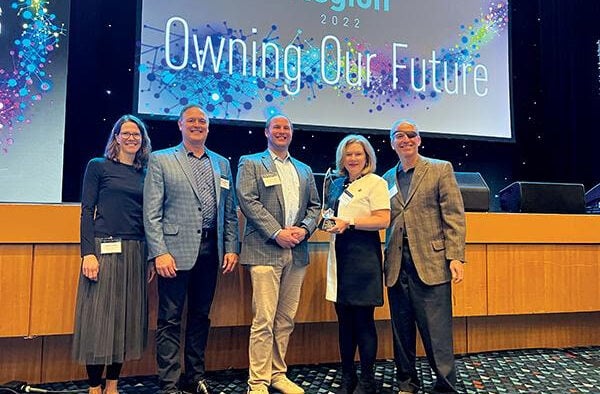 Avondale Estates, GA — The city of Avondale Estates and the Avondale Estates Downtown Development Authority received the 2022 Regional Excellence Award in the great places category for the Town Green. The award was given to the city by the Atlanta Regional Commission on Friday, Oct. 28.

The ARC’s annual awards honor visionary projects that are improving quality of life in communities across metro Atlanta, according to a press release.

Mayor Jonathan Elmore and City Manager Patrick Bryant accepted the award at the ARC’s 2022 State of the Region Breakfast at the Georgia World Congress Center. They were joined by Sheri Locke and Bill Clark from SSOE Group, Jerry Miller of Fabric Developers and Assistant City Manager Shannon Powell.

“It’s incredibly exciting for our community to be recognized. A lot of people, from the BOMC, to the DDA, to staff, residents, and development partners, have worked to make this project a reality for well over a decade,” Bryant said.

The city broke ground on the project in June 2021 and construction is nearing completion. The project includes the construction of four acres of the land. About two acres will be a park, and the other two acres will be an interim solution and potential commercial solution. The site is on Highway 278/ North Avondale Road between Lake and Oak Streets.

The city’s 2014 downtown master plan included converting this acreage into a park. In 2018, Avondale launched an open, public process to determine the best use of the land. Mayor Pro Tem Brian Fisher previously told Decaturish the city received about 13 designs and the thought originally was to take pieces of each design and combine them. But when the commissioners and staff looked at all the designs hanging on the walls of City Hall, “entry number nine” was the favorite.

The concept was submitted by Avondale resident and local architect Sheri Locke in May 2019. Locke’s design included commercial buildings next to the road and a public green space behind them, Decaturish previously reported.

The city reached an agreement and executed a memorandum of understanding with Fabric Developers in November 2019. Fabric Developers worked with their architectural firm, Stevens and Wilkinson, to select the design and construction firms. The City Commission approved a contract with Site Solutions to complete the design of the town green in December 2019.

“The City of Avondale Estates is a Tudor-inspired planned community known for developments that enhance quality of life for residents of all ages and abilities,” a video of the Town Green’s award presentation says. “With its inviting space for town activities, a designated area for food trucks, and a network of mixed-use path that connects the greenspace to the commercial downtown district, the recently completed two-acre Town Green furthers the city’s dedication to inclusive development.”

Additional partners recognized for the project who were unable to attend the event include Long Engineering, PDC Solutions and Reeves Young Site Solutions.

To learn more about the ARC’s Regional Excellence Awards and see a video of the presentation, click here.