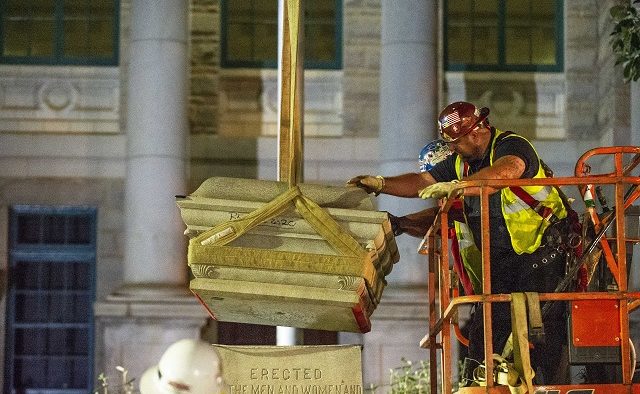 A crane lifts off another section of the Confederate monument on the Decatur Square June 19. Photo by Dean Hesse.
Share

Decatur, GA — A Confederate monument removed from the Decatur Square in 2020 is likely gone for good.

In June, Georgia Division of the Sons of Confederate Veterans – a pro-Confederacy group – sued numerous city and county officials, including Decatur City Attorney Bryan Downs seeking to have the monument restored. But that lawsuit was dismissed on Oct. 13 after Judge Yolanda Parker-Smith found the plaintiffs lacked standing to sue over the monument’s removal.

Downs described the lawsuit as a “publicity stunt.”

“I am of course grateful that Judge Parker-Smith granted the motions to dismiss, putting an end to this frivolous lawsuit,” he said. “The courts of our state are not supposed to be used for publicity stunts, but in my opinion that was the primary objective of this suit.”

“Plaintiffs do not have standing to bring this action; they have not alleged any concrete or particularized injury or asserted any injury other than complaining that removal of the Obelisk violated [state law against removing monuments],” the judge wrote.

Superior Court Judge Clarence Seeliger in 2020 ordered the monument to be removed, responding to a complaint filed by Downs. In his complaint, Downs said the monument has become “a flashpoint, a danger to the community, and a burden on the city of Decatur.”

Downs specifically cited repeated vandalism of the monument as a reason to expedite its removal. Downs called the lawsuit filed by the Sons of Confederate Veterans “a lost cause.”

In dismissing the lawsuit, Judge Parker-Smith wrote, “This Court agrees with Defendants that here Plaintiffs seek to challenge the merits of the prior order, which a third party is not permitted to do by collateral attack without showing a lack of subject matter or personal jurisdiction; Plaintiffs have not done so. Thus, this Court grants Defendants’ motions to dismiss for all the reasons set forth above.”

The monument was located by the old DeKalb County courthouse and was constructed in 1908. It was widely seen as a symbol of the Jim Crow era south, a not-so subtle message to Black residents who would question the status quo. Activists had been calling for its removal for nearly three years.

The monument will be replaced with a statue honoring the late congressman John Lewis.

Activists advocating for the monument’s removal scored another victory against symbols of white supremacy this week when the cannon commemorating the 1836 “Indian War” was removed from Decatur Square. Both the cannon and the Confederate obelisks were placed on the Square by the United Daughters of the Confederacy.