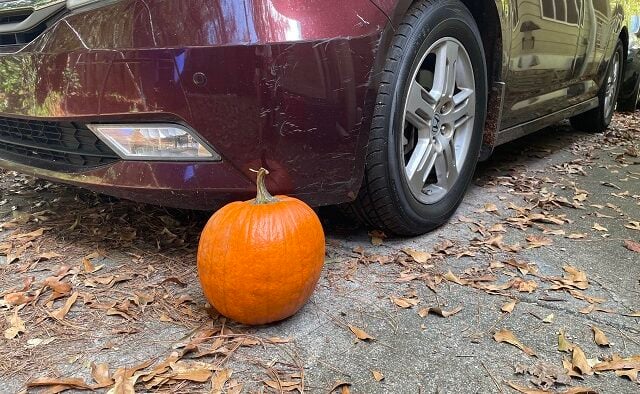 Last Halloween, a child was run over by and killed while trick-or-treating just outside the city of Decatur. Unfortunately, he wasn’t the only one. Halloween is the most dangerous night of the year for child pedestrians, with kids three times more likely to be fatally injured – ten times more likely if they’re under eight years old.

Pedestrian fatalities have been rising dramatically across the nation, especially in Georgia, where the pedestrian death rate for 2021 was 24% higher than 2020 and 46% higher than 2020. For years, Georgia’s streets have been designed for the convenience of drivers, with little thought for the safety of people on foot, on bikes, or in wheelchairs. Engineers have made roads wider, removed obstacles, added turn lanes, created special “slip lanes” that make it easier for drivers to turn or enter driveways.

These changes have come at a steep cost. Wide intersections are deadly for people on foot, especially children. Wider streets increase speeds. Slip lanes make it harder for drivers to see pedestrians. This is especially true today, when motorists are distracted by phones and drive larger vehicles with much less visibility. (If you want a truly scary image for Halloween, look at this, or this, or this.)

In recent years, some municipalities have begun to claw back a bit of precious space for people on foot, and the city of Decatur is a good example. If some of our streets are safer today, it’s because our commissioners and city staff have had shown foresight and leadership, supported by citizens who prize safety.

Still, many of our streets remain extremely dangerous: Commerce Drive, especially near the soon-to-be-ex-Kroger, has killed and injured many walkers and bikers; Scott Boulevard, where crashes frequently occur and where a Decatur man was recently killed in a crosswalk; and Candler Street, site of numerous crashes. Speed limits on these streets are high and routinely exceeded.

Unfortunately, the city can only do so much because these streets, being state routes, are controlled by the Georgia Department of Transportation (GDOT), whose outdated policies keep them dangerous. The most egregious such policy is the so-called 85th Percentile Rule, which GDOT uses to set speed limits that are much higher than they should be. According to this procedure, engineers measure rates of speed along a roadway and determine the speed that 85% of drivers do not exceed. That, then, is made the speed limit. The faster drivers feel like going, the higher the speed limit GDOT selects. Many engineer and street safety groups have pointed out that this policy might work for sparsely populated areas, but isn’t suitable for urban or dense suburban areas like the City of Decatur. GDOT doesn’t care. It allows this zombie policy to shuffle forward.

GDOT needs to change this policy, but our state lawmakers are also culpable for the rash of deaths on our roadways. Georgia law has made it impossible to enforce posted speed limits. Georgia State Code §40-14-8 explicitly forbids the use of radar evidence in court unless the speed of the vehicle exceeds the posted limit by more than ten miles per hour. That means that those drivers you see roaring past kids at 45 mph in a 35-zone can’t be cited. High speeds are the most significant cause of death and serious injury on our roadways, so our legal code is killing kids.

The same clause makes the use of speed cameras illegal except in specially designated school zones. Speed cameras are routinely used in other countries and in some US states, where they’ve been shown to reduce speeding and decrease the number of crashes.

We need to hold our leaders accountable. GDOT needs to adopt new methods to set speed limits, prioritizing safety over speed. Our state politicians must change the sections of the Georgia Code that favor dangerous drivers over defenseless children. And we all need to drive slower and safer.

In the meantime, let’s be grateful for the steps the city of Decatur has already taken to improve safety. Our streets aren’t just for cars. They’re for walking, biking, stopping and visiting with neighbors, and, of course, for ghosts and ghouls and witches.